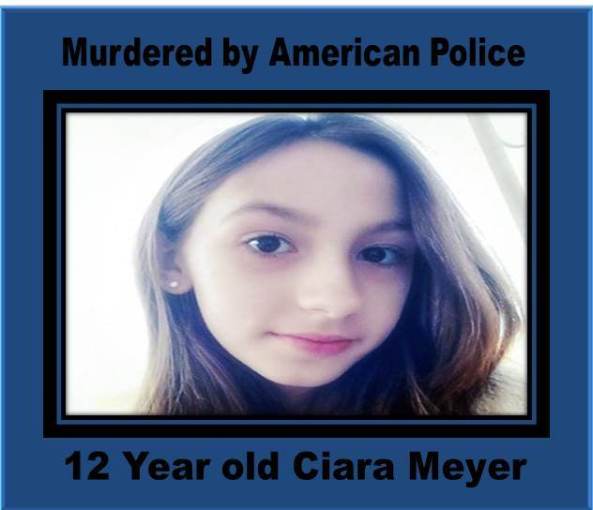 Police willfully placed this young girl in danger along with her father. These murders of young American due to Police Aggression and Incompetence happen far too often.

Penn Township, Pa — 12-year-old Ciara Meyer was shot and killed by a police officer this Monday morning as her family was being evicted from their home. According to police, her father, 57-year-old Donald B. Meyer, pointed a gun at Pennsylvania State Constable Clarke Steele during the eviction. The police say that Steele shot at Meyer when he had the gun pulled on him, and grazed the man’s arm. However, the bullet went on to fatally strike young Ciara Meyer after it went through her father.

Donald Meyer was taken to the hospital but was also charged with aggravated assault, simple assault, terroristic threats, and reckless endangerment.

“Here’s a little girl that doesn’t even have a chance to grow up and live her life, and all because of this senseless act. It’s horrible, absolutely heartbreaking,” the neighbor said.

Meyer’s aunt, Hope Cordas Rohde, wrote on Facebook that, “We are so broken as she was just a little girl and we loved her so much. My heart hurts so very much. Such a sad world this is when an innocent child is shot and killed. May God give us peace.”

According to PennLive.com, the family owed $1,780.85 in rent, which was roughly 3 months behind for them.

Essentially, the Police murdered this girl over less than 2,000USD. That is what your life is worth America. The State does not care about you. It’s not that Black lives do not matter. It is not all lives that matter. It is that NO LIFE MATTERS to the State.

The Average American Citizen holds only the value of his or her worth in taxable income, goods and property. Beyond that, your life does not matter.

When will Americans come to comprehend this basic fact about the State. All States. Yes, even the American State.

“We are so broken as she was just a little girl and we loved her so much. My heart hurts so very much. Such a sad world this is when an innocent child is shot and killed. May God give us peace.”

There will be no such peace from God or any source until the State is brought to heel and made to respect the lives of human beings as more than a simple funding source.

Ciara is the 21st person and the first child to be killed by law enforcement in 2016.