Technically, I’ve been to North Korea.  I’ve never been to a city there, but, I’ve stepped foot across no man’s land into North Korea while stationed at Camp Bonifas in the Republic of Korea as part of the United Nations Command Security Forces-Joint Security Area (UNCSF-JSA). While there, I was allowed to go over to the North Korean side of Pan Mun Jom a couple of times. I, also, snuck across a couple of times in the DMZ.

Not very far mind you. Technically, the North Korean Guards could shoot you if they spotted you crossing the DMZ. They would point their rifles at us all the time. There were a couple of areas on the North side of the DMZ that were over grown with shrubs, trees and high grass. We used to go up there and take our pics just to say; “I’ve been to North Korea.”

The North Koreans (in the Guard Towers, not those in PMJ) would point their rifles at us all the time even when we were on the RoK side of the DMZ. They (and we) were authorized to shoot at anyone in the two klik (or mile?) no man’s land within the DMZ. I think the DMZ is like 6 miles or kliks across. I remember the first time that I saw a rifle OBVIOUSLY pointed at me. I was at “The Bridge of No Return” re-enlisting. US Flag and everything. Standing there at the mid point with my right hand raised reciting the oath of re-enlistment and out of the corner of my eye I could see a NK sniper pointing his rifle square at my head. I swear the guy even winked at me.  It could have been the sun in my eye.  Who knows.  The memory is from ages ago.

Back then the US had soldiers patrolling inside the DMZ.  We had maps of minefields on hand for our side and known MFs for their side. I actually kept one of these maps and have it in my storage room back in Kentucky. It delineates all major and minor positions as well as minefields and known incursion sites and incident sites, known trails as well as the defensive perimeters and positions around PMJ, Bonifas, Liberty Bell, OP Oellette, Barrett QRF Facility and Freedom Village. We used to drive around up there as kind of a joy ride/patrol. They encouraged us to go out as a show of force. Mostly just for that….for show. I was actually able to take my (ex)wife up to Freedom Village and pretty close to the DMZ. She was pretty excited about it.

I was up there when Kim Il Sung passed. The NKs pulled everything up on line as if they were massing for an attack. They pulled out of the Armistice. We were preparing mentally to die when that went down. Making peace with our maker so to speak. We didn’t know what was going to happen. Clinton sent Carter in and Carter sold us down the river and Clinton was hailed as a hero and peacemaker. When in reality all it did was give NK the potential and tools to go Nuke on the World.

While there I learned about the “Axe Murder incident.”  One of the Korean guys who worked for me was the man that drove the truck over Bonifas and Barrett to stop the NK Guards from further mutiliating their bodies. He risked his life. It was huge. Meeting a real life hero. He was also a Vietnam War vet. Korea sent one Brigade over there for a time. I think they were pulled out because they were so brutal.  US Soldiers who were stationed at the DMZ during the incident and a few other times were authorized to wear the 2ID Patch as a Combat Patch. It was odd seeing old guys running around with that Combat Patch.

I’ve heard that when the US patrolled the DMZ, that occasionally US troops would meet up with NK troops and sometimes they’d actually interact in a positive manner. That said, if either sides troops are caught on the opposite side patrolling, deadly force was authorized. To my knowledge, the US was caught up in firefights as late as ’92 when we pulled the majority of our troops out of the DMZ.

In Pan Mun Jom, the NK soldiers and US and RoK troops interact on a limited basis. Mostly eye contact and smiles, though.

Every once in a while, a NK trooper will defect by running across to the RoK side. When that happens, it usually results in a firefight. The NK Officers will order their men to shoot the defector. The RoK and US soldiers will try to get him under their protections as soon as possible. To my knowledge, no RoK Soldier has ever defected to the North in Pan Mun Jom. No US soldier has ever defected via that route either. Though, I seem to recall a US Navy Seaman defecting to NK in the 80s or early 90s. I may be mis-remembering.

It was fascinating being up there. That said, when I crossed Freedom Bridge out of the DMZ for the final time…it was as if a great weight was lifted off of my shoulders. I hadn’t realized that it was so stressful while I was there, but, as we crossed Freedom Bridge and we stopped for one last look back and to throw our coins into the Han River, a feeling of intense relief that I had survived that year flooded through me. It was immense. Intense. Indescribable.

Below is a photo of the North Korea Flag which flies just beyond the DMZ. 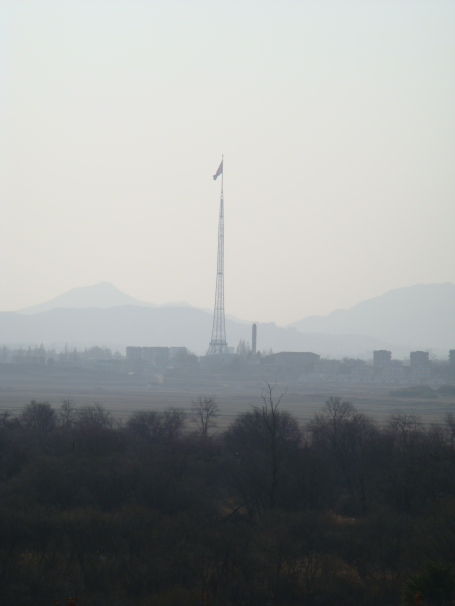 While I was there, Soldier of Fortune magazine had a 1,000,000 USD reward for a piece of the flag…and proof, of course.

Post Script:  I wrote this a long time ago.  The events herein occurred a long time ago.  Early 90s.  Memories from 20 years ago are now pretty hazy.  That said, I know that the NK guards in the towers on the DMZ would trail us with their rifles as we drove around the DMZ.  As for the re-enlistment scene that I describe, that may have been the over active imagination of a 23 year old.  But I know for a fact that the United States violated the Armistice agreement by keeping prohibited weapons close to and inside the DMZ.  Why would I expect that the North Koreans did anything different.   Also, I was there when Kim Il Sung died.  Kim Jong Il famously pulled out of the Armistice for a time and pulled massive amounts of Armor and Arty up onto the DMZ.  We thought we were dead.  Those of us at Camp Bonifas and Camp ‘Liberty Bell.  The KATUSA’s spent all day kissing and hugging each other good bye.

Here I am re-enlisting at the Bridge of No Return: 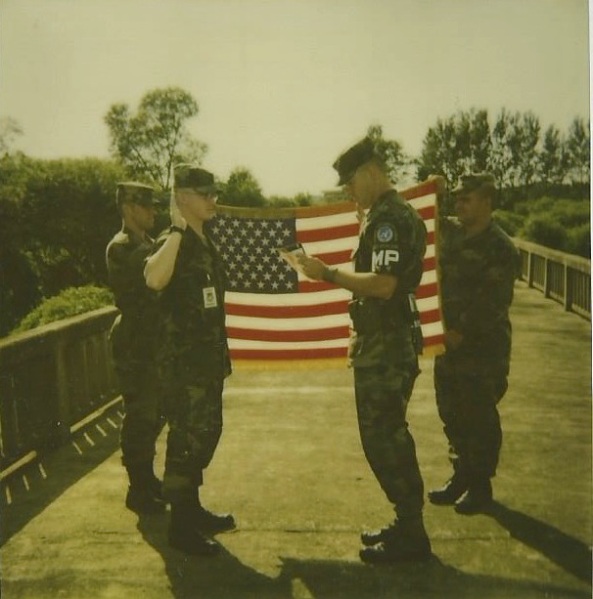 And a few more photos of what I think is me in Freedom Village: 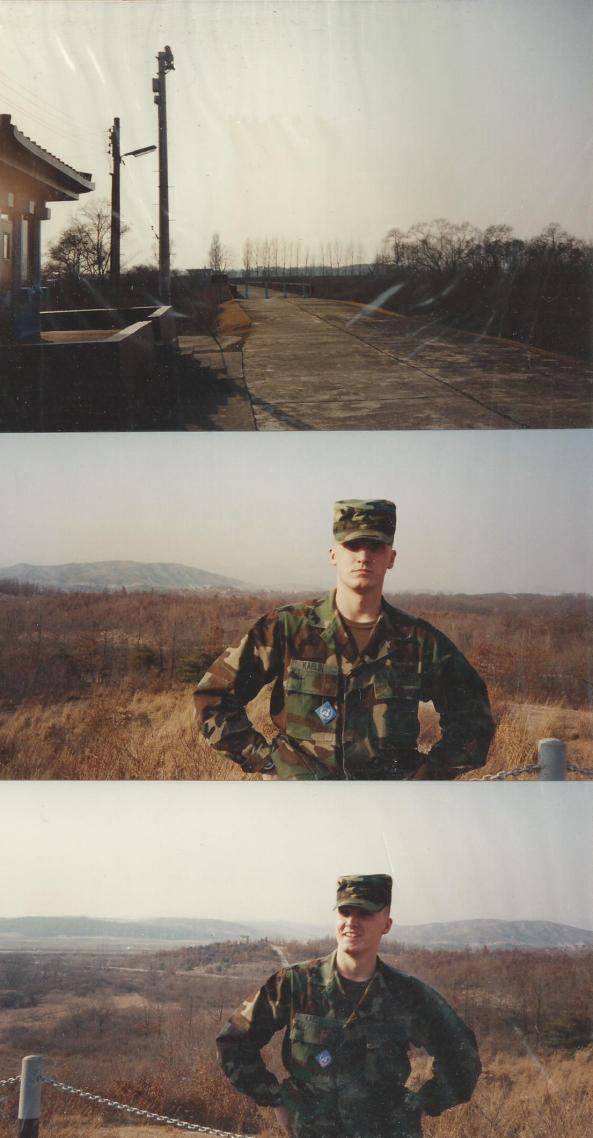 The first picture below was taken from inside of one of the buildings at Panmunjom.  The second, I’m not sure.