So! I was thinking. I’d like to build a synagogue and a Mormon Temple in Mekkah, Saudi Arabia. I feel Christians and Jews should have a place to worship when they visit Mekkah. What’s that you say? Non-Muslims aren’t allowed to travel to Makkah. But, then….why…well, why are they offended that Switzerland banned …minarets when they ban whole groups of humanity from their town?

Muslim tradition attributes the beginning of Mecca to Ishmael‘s descendants. In the 7th century, the Islamic prophet Muhammad proclaimed Islam in the city which was by then an important trading center. After 966, Mecca was led by local sharifs until 1924 when the Ottoman Empire collapsed and it came under the rule of the Saudis.[4] In its modern period, Mecca has seen tremendous expansion in size and infrastructure.

The modern day city is the capital of Saudi Arabia‘s Makkah Province, in the historic Hejaz region. With a population of 1.7 million (2008), the city is located 73 km (45 mi) inland from Jeddah in a narrow valley at a height of 277 m (910 ft) above sea level.

Where is the UN condemnation over the fact that only Muslims can enter Makkah?

They certainly stepped up quickly enough to condemn Swizerland because they voted against allowing minarets to be built in their country.

Saudi Arabia, the country from which most terrorism originates, bans whole people from even entering their city.

Some enterprising Swiss individual needs to petition to build a Church or Temple in Makkah.  See how well that goes over.

Entry to Mecca for Non-Muslims

“Non-Muslim Bypass:” Non-Muslims are not permitted to enter Mecca.

Non-Muslims are not permitted to enter Mecca under Saudi law.[1][37]

The Saudi government supports their position using Sura 9:28 from the Qur’an:

“O you who believe! The Mushrikeen (idolaters) are (spiritually) unclean, so they shall not approach the Sacred Mosque after this year; and if you fear poverty then Allah will enrich you out of His grace if He please; surely Allah is Knowing Wise.”[Qur’an 9:28]

The existence of cities closed to non-Muslims and the mystery of the Hajjis have often aroused intense curiosity in people from around the world. Some have falsely claimed to be Muslims in order to visit the city of Mecca and the Grand Mosque to experience the Hajj for themselves. The first to leave a record was Ludovico di Varthema of Bologna in 1503.[38] The most famous account of a foreigner’s journey to Mecca is A Personal Narrative of a Pilgrimage to Mecca and Medina, written by Richard Francis Burton.[39] Burton traveled as a Qadiriyyah Sufi from Afghanistan; his name, as he signed it in Arabic below his frontispiece portrait for The Jew The Gypsy and El Islam, was al-Hajj ‘Abdullah.[citation needed] Individuals who use fake certificates of Muslim identity to enter may be arrested and prosecuted by Saudi authorities.[40]

GENEVA � Over 57 percent of Swiss voters on Sunday approved a blanket ban on the construction of Muslim minarets, according to official results posted by Swiss news agency ATS.

A final tally of 26 cantons indicates that 57.5 percent of the population have voted in favour of the ban on minarets — the turrets or towers attached on mosques from where Muslims are called to prayer.

Only four cantons rejected the proposal brought by Switzerland’s biggest party — the Swiss People’s Party (SVP), which claims that minarets symbolise a “political-religious claim to power.”

Honestly, I think that this should be the policy of the west until Muslim countries change their policies toward Churches and other religions/beliefs within their own countries.

They’ll complain, but, they haven’t a foot to stand on.  Especially the most vocal of the complainants such as Saudi Arabia.  The unholy House of Sa’ud rails against intolerance of Islam in other countries, yet, they are intolerant of any other religion or belief within Saudi Arabia–even forcing non-Muslim women to wear the hijab–and are the primary exporters of Wahhabism and Islamic Fundamentalism throughout the globe.

All religions are bi-polar.  At once espousing peace and war, intolerance and inclusiveness.  Islam is no worse a religion than any other in my opinion.  It’s leadership, though, leaves much to be desired.

The U.N. Human Rights Committee called the posters discriminatory and said Switzerland would violate international law if it bans minarets.

If this is the case, then why is Saudi Arabia not in violation of International law.  There are several Muslim countries with these restrictions against building religious structures.  Seems a bit of a double standard to me.  The UN should clean up the primary violators of international law before they go looking for villains in a country like Switzerland.

If a backlash against Islam is in the offing, much of the blame can and should be placed squarely on the shoulders of leadership of Saudi Arabia, Iran, Palestine and Syria. 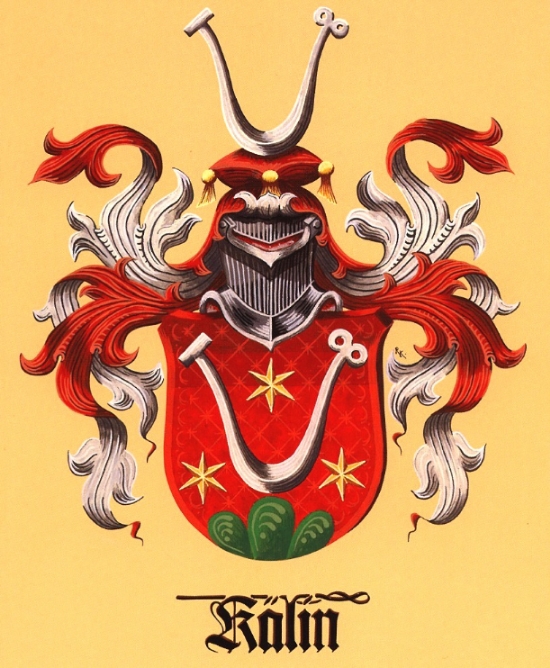 It seems from the research of my brother and others around the States that the Kaelins of America emigrated to America from the town of Einsiedler of Schwyz Canton in Switzerland.  My particular branch landed in New York, made their way to Pennsylvania and from there traveled on to Louisville, Kentucky.  In Louisville, Kentucky, you will find two branches of Kaelins.  I suppose that we are related but we do not interact for the most part.  Perhaps there was a rift some time back.  I know not.  The fact remains that for the most part the Kaelins of the Highlands and the Kaelins of St. Matthews (my branch) do not much relate in the present.

My older brother,  who now calls Augusta, Georgia home, has conducted a fairly comprehensive survey of our family genealogy.  In his research, he’s come across various legends, symbols and stories of our family and it’s various branches.  One of those symbols is the family crest or coat of arms.  This is depicted below in color.  Prior to this find, I had only seen various black and white iterations of the Kälin Coat of Arms.   It’s a fairly distinctive insignia with a rich tradition and meaning.  If one pays heed to the legend.

I will leave it to the article below to tell the tale.

A Short Article From The Einsiedler Gazette KALIN. Old Einsiedler forest people, who are represented in all quarters with numerous families. Many clergymen, monks, and nuns came from them. Peter Kälin from Einsiedeln, born 1700, died 1762, became abbot of the monastery of Wettingen in 1745. Many of this name are also represented among Einsiedler artists. Konrad Anton Kälin from Langruti was a painter and executed the pictures on the side altars in 1752, St. Anton and Brother Klaus, in the church in Willerzell. Meinrad Kälin, born 1790, died 1834, painted miniature portraits at first, later landscapes in water color, that he etched in copper himself, especially of Gotthardstrasse for Fusslin in Zurich. Josef Kälin, carver, carved for Pfaffikon about 1693 the statues of St. Josef and St. Anna and in 1704 a crucifix, and simultaneously a Mater Dolorosa for the monastery in Fahr. This Josef Kälin is not the same sculptor of the same name, who according to the death register drowned on 2 April 1709:>>Josephus Kälin, lapicida, aquis submersus<<. Josef Adelrich Kälin, born 1728 and his sons Peter Paul, 1757-1834 and Josef Meinrad, 1761-1818, were artistic locksmiths. In 1827 Josef Benedikt Kälin performed the first lithography in Einsiedeln with the support of the monastery (P. Gall Morrel). From his studio came the illustrations in the Fass-Rigert history of the Canton of Schwyz of 1832-1833 and the accompanying coat of arms. From Einsiedeln also came the Kälin family that settled in Schwyz and was named as a (squatter/small farmer/resident with no citizen rights) in Rodel in 1676. They were admitted as new citizens in 1798 and appointed land in the old quarter in 1806. Politically the Kälin family came to the fore in the rebellion of 1764. Councilman Josef Kälin in Wani, Benedikt and Rupert were captured as leaders of the rabble(?) and taken to Schwyz and beheaded on the meadow with two saddlemakers. Josef Meinrad Kälin in 1803 was the first provincial baliff after the Helvetian (union?) and was reelected seven times by 1823. The coat of arms can be found in the chapel of 1682 with the name P. Peter Kälin, died 1695: in red a silver gorget on a trimount, accompanied by three golden stars.

According to the research of Dee Kaelin of the Kaelin Genealogy Page, the name Kaelin seems to come from the word Kehl meaning throat in a local Swiss-German dialect.

It is my understanding that the Kaelin name, in it’s original spelling of “Kälin”, holds Swiss Citizenship prior to 1800. This name originated in the town of Einsiedeln, Canton Schwyz, Switzerland. Kaelins make up about one-third of the names, and is the largest surname group in the town. The earliest mention of the name is from about the 1300s and the first time this name appears on any document was in August 1319. The name supposedly comes from the German word “Kehle”, which means throat. In 1609, all families in Einsiedeln obtained a Stamm-Number. The Kalin Clan, whose numbers consist of 48 lines, obtained the numbers 78 through 120. It has been suggested that a Kälin may have been involved with the forming of the Swiss Confederation, although to my knowledge there is no evidence to support this theory. It has also been suggested that there has been a Kälin serving in the Swiss Guard for hundreds of years, possibly since it’s inception. Again, I have not been able to confirm this. In Switzerland the name is spelled “Kälin”; in America it has been consistently spelled “Kaelin”.

The picture below is of a small stained glassed depiction of the Kaelin Coat of Arms.  Given to Walter Kaelin by his father about 30 years ago.  Walter, in his correspondence with my brother, told of the Battle of Montgarten between 3000 Swiss Peasants and an Hapsberg (Austrian) Army.  The Swiss supposedly won this battle with 12 casualties vs 3000 casualties for the Austrians.  The Spartans have nothing on that.  I wonder if this is legend or historical fact. 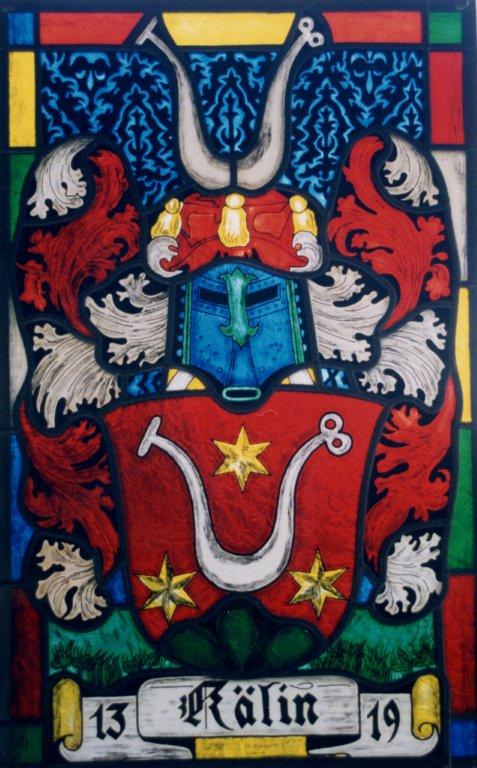 Apparently the Swiss Confederation were fiercely independent.  As much then as they are today.  I admire that.  In this age of globalism and anti-Nationalism, the Swiss are maintaining their independence from the great national mergers such as the Euro Union.  It will free them of the mass corruption that results from the influence of Germany and France.