I do love one thing about Trump even if I did not and would never vote for him. He pisses everyone off.   GOP, NATO, DNC, Russia, China, Iran, Saudi Arabia, NoKo, Canada, Mexico…..almost every group that can get all up in their feelings has been angered by The Donald.

Trump always proposes the extreme. It’s just his personality.
At the end of the day, he settles just like he does in court.
Can you guys REALLY not see the pattern?
It’s truly odd that people can’t seem to understand this.
Also, we have three branches to our Government.
1. Executive
2. Legislative
3. Judicial
They are supposed to “check and balance” each other. There are supposed to be a Separation of Powers. “Supposed” being the operative word.
Under Obama, so many of the Liberals of this Nation loved the fact that Barry was so fond of overreach. Under Bush, so many of the Neo-Conservatives loved the fact that George was so fond of overreach.
Now, we’ve got a guy who scares about 60% of the country to death.
Now!
NOW!
Only now…do you people finally come to the understanding of why Executive Overreach is so dangerous to the American Republic.
Yes, the Republic.
Because we are a Republic.
We are not an Imperium wherein the Lords Bush and Obama can do as they please.
The Founding Fathers set up a Republic that was designed to protect the minority from the majority.
It hasn’t always worked especially when we allowed the South (and many in the North) to treat some of our fellow humans as less than or about 3/5ths human and when our Great Democratic Socialist Hero FDR slammed a few hundred thousand of our fellow citizens in the klink for nothing more than being born to American Citizens who were of Japanese Heritage.
Now…do you understand how your hero worship of Politicians is dangerous.
Now that you’ve got a guy who loves himself more than any Islamic Potentate in history?
Of course, it is dawning on you now.
HOWEVER!!!
Will you remember when it is one of YOUR own who believes exactly as you believe?
Somehow, I don’t think most Americans will learn the lesson. They’ll forget within six months or right after the latest news cycle has ended.
Trump can do no more harm than the Legislative Branch and/or the Judicial Branch allows him to do.
He can do no more harm than the Citizens of America allow him to do.
Perhaps, it is time that the American people wake up and do their jobs. Be informed. Be active. Vote responsibly. Hold Politicians accountable. All Politicians. Not just their politicians.
There are Americans. There are Democrats. There are Republicans. You cannot be both an American and a Republican. You cannot be an American and a Democrat.
You can be an American.
Be a good American. 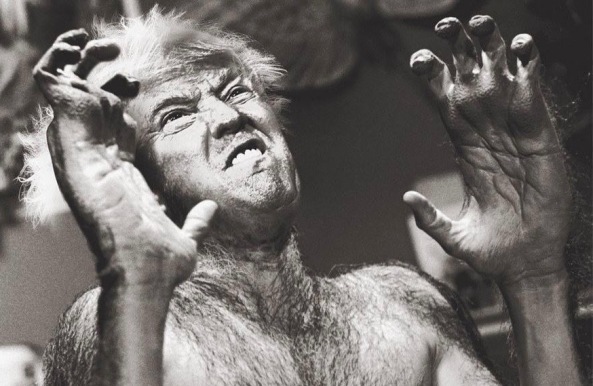 Now, you know why.

Unfortunately, it is too late.

So, I give the same warning to the Conservatives, Republicans as well as the Fan Boys and Girls of President Elect Donald Trump.

Be wary and pay close attention to the precedents set by President Trump.

The precedents and lawlessness of Barack Obama and his colleagues in the White House and the DNC are about to come back to haunt many Democrats. Watch this
and learn.

Democrats are going to rue the day that they cheered on Lois Lerner. Might be time to start collecting old tax documents and receipts if one is a Democrat.

There’s a new Drone Ranger in town and he has a whole new knapsack full of Executive Privileges and Precedents upon which to draw thanks to President Barack Obama.