TURN OFF YOUR TV!

Delete the Mass Media from your life. 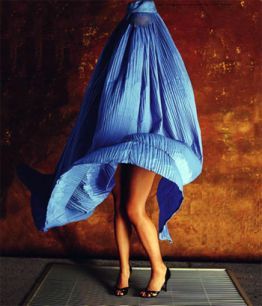 The dumbest bit of fabric ever devised by an evil group of patriarchal assholes!

For these woman, like the women in Afghanistan and other countries where the rights of girls and women are being stripped away under the pretext of religious piety, feminism is a life and death matter. A spectacular example is the life and near-death of Malalai Joya.

She had committed no crime, had set up an orphanage and a health centre, been elected to parliament, but for her affront to the dignity of the new male-dominated institutions, for calling it a sanctuary for “warlords and theocrats” and comparing it to a zoo, she was thrown out of office by a majority vote of parliament, threatened with death, abandoned by the government, forced to move from safe house to safe house. She has survived two assassination attempts.

She is also banned from flying. To get to Australia she had to leave home under the all-enveloping burqa – a garment she describes as “disgusting” – travel by van to the Pakistan border, then by another van to a city in Pakistan, then fly to Bangkok, then to Sydney. The journey took almost three days. As the most outspoken woman in Afghanistan, she lives with the constant risk of murder.

On April 12 a leading Afghan feminist and member of the regional parliament in Kandahar, Sitara Achakzai, was abducted and then murdered by Taliban gunmen.

Any man who is for this bit of oppressive fabric is an uneducated lout and, most probably, a bigot.  Any woman who has a positive view of the burqa or hijab is a self hating, propaganda  laden soul who has no idea of her own potential as a human being.  God did not intend for half of humanity to be covered and marginalized or he’d have not blessed women with the intelligence that is so obviously present in their gender.

The UN and every other so called humanitarian organization should be ashamed of themselves for not doing all that they can to stamp out this stain  on human dignity.

Some Muslim women argue that they wear the hijab out of a desire to appear humble before God.  It is their personal beliefs that motivate them to wear the hijab (veil).  This is all good and well for those Muslim women who have a choice.   The problem is with the millions of poor, uneducated women who do not have the same choices and opportunities as these women.

On the other hand, we have the women in places like Afghanistan and the Sinai who are forced to wear the hijab and the burqa.  These women do not have a choice.  These women are subjugated by the medieval minds of men who have no respect for women and see them as only a vessel for their seed in the production of offspring.

It is all good and well that educated women from privileged backgrounds in the Middle East, other predominantly Islamic countries and the West have the choice as to whether to wear the hijab or not.  The unfortunate outcome of their donning the hijab, though, is that said decision is used by oppressive forces and backward, patriarchal madmen to enslave the minds and to physically oppress of millions of women in Central Asia, the Middle East and India.  These men use Islam, the hijab and the burqa as a means to keep their boot heals squarely across the neck of women in all of the lands of Islam.  To women who are forced to wear these garments, the hijab and the burqa are not a symbol of humility in the face of God, but, a symbol of systematic rape, oppression and violence.

Islam is like any other religion.  There exists both beauty and ugliness within the pages of all religious books.  Evil men and women pick and choose the verses and suras which back their decrepit and despotic philosophies in order to further their personal wealth and twisted designs.  Good men and women use those words and phrases from these books which advance the cause of humanity towards a better tomorrow.

Until all Muslim women have the freedom of choice to wear the hijab, I believe it is the duty of all peoples to take a stance against the use of the veil for ill intent.  This obligation is especially incumbent upon Muslim women whose Sisters in Islam are the primary victims of this particular form of oppression.  This is a choice that Muslim women have to make.  I agree that the hijab when it is worn in free choice is an idea of beauty.  Humility before God (for those who believe in these religions) is an appeal to the grace of humanity.  It is, indeed, a beautiful act.  The problem is that millions of men across the Muslim world use the hijab and the burqa not as an appeal to God but as a tool of personal power and in acts of narcissism and nihilism.  These acts are in direct contravention to the Qu’ran, the Bible and the will of God.  To deny or ignore these acts and the suffering of these women is to deny reality.  Muslim women must stand together on this issue.  The oppression of one is the oppression of all.