“They’re not racists or rednecks, they’re actually pretty decent people. So, after talking to a number of them, I sort of wanted to sort of write this.

Donald Trump came to the Detroit Economic Club and stood there in front of the Ford Motor executives and said: if you close these factories, as you are planning to do in Detroit, and rebuild them in Mexico, I am going to put a 35% tariff on those cars when you send them back and nobody’s going to buy them.

It was an amazing thing to see.

No politician — Republican or Democrat — had ever said anything like that to these executives. It was music to the ears of people in Michigan and Ohio and Pennsylvania and Wisconsin. The Brexit states. You live here in Ohio. You know what I am talking about.

Whether Trump means it or not, it’s kind of irrelevant because he’s saying the things that people who are hurting. And it’s why every beaten down, nameless, forgotten working stiff who used to be part of what was called the middle-class loves Trump.

He is the human Molotov cocktail that they have been waiting for. The human hand grenade that they can legally throw into the system that stole their lives from them. And on November 8th — Election Day — although they have lost their jobs. Although they’ve been foreclosed on by the bank. Next came the divorce and now the wife and kids are gone. The car’s been repossessed. They haven’t had a real vacation in years. They’re stuck with the shitty Obamacare bronze plan. They can’t even get a f**king percocet

They see that the elites who have ruined their lives hate Trump.

The Media hates Trump…after they loved him and created him. Now, they hate him. Thank you, Media.The enemy of my enemy is who I am voting for on November 8th.

Yes, on November 8th, YOU — Joe Blow, Steve Blow, Bob Blow, Billy Blow, Billy Bob Blow, all the Blows — get to go and blow up the whole goddamn system because it’s your right.

Trump’s election is going to be the biggest F**K YOU ever recorded in human history.

And it will feel good.”

The Right Wing Media (Breitbart) ended with the above as it fit their agenda.

However, Moore goes on to add the following:

And over 4 million of them signed a petition to have a do-over, they want another election, but It’s not going to happen. Because you used the ballot as an anger management tool. And now you’re fucked. And the rest of Europe. They’re like, Bye Felicia. So when the rightfully angry people of Ohio and Michigan and Pennsylvania, and Wisconsin find out after a few months in office that President Trump wasn’t going to do a damn thing for them, it will be too late to do anything about it.

But I get it. You wanted to send a message. You had righteous anger. And justifiable anger. Well, message sent. Goodnight America. You’ve just elected the last president of the United States.

I can’t disagree with this either. 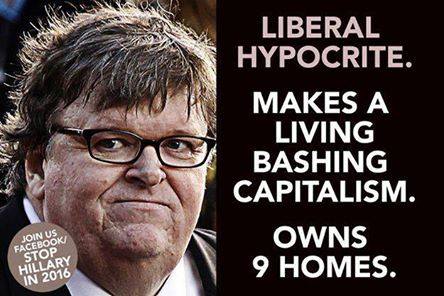 America has been supporting despotic monarchies since, at least, World War II. That thanks to our late, “Great” President Franklin Delano Roosevelt. It is disgusting to me and should be to any American that we are so deeply embedded with the tyrants of this world. All in the name of Corporate Greed. But don’t let that stop anyone from decrying Moore as a hypocrite or a fat ass. I think it disgusting how obese MM has become. He looks like a muppet, he’s so fat.

Some of the points he makes in his documentaries are very much laden with truths. Yet, he has attacked corporate greed and does profit from the same system. I can’t blame the guy for using the system as it is. He cannot change the whole of the system. He can only make others aware. Certainly, he is a bit of an ass in the way that he gets his point across. I have a certain amount of respect for that, though.
My goal in life has always been to comfort the afflicted while afflicting the comfortable. Working within the system is a good way to go about it. The only persons who can work outside of the system are those willing to be outlaws and those who are born to a silver spoon. Moore serves his purpose and I, for one, am glad to have him speaking his truth. His truth is as valid as many others, more valid than some and less than others. To dismiss all of Moore’s work simply because it makes one uncomfortable is unintelligent and speaks more to the listener than the crier.

Moore is still an American. Even if there are aspects of America with which he disagrees. The Conservative Right hates more because he exercises his right to Freedom of Speech. This is hypocritical of the Right. Moore should speak his mind and tell his truth. If that leaves the Right butthurt, so be it. I, for one, can see where Moore has been correct. A good, healthy, open minded reading of history proves Moore to be correct in many of his more salient points in his documentaries. Moore recently stated that snipers were cowards and shot people in the back. Many folks who have been to War agree with this sentiment. A sniper hides and takes shots at folks who have no idea from where they are being sniped. This is the nature of the job. It’s the same in any war, their snipers are murderous cowards. Our snipers are valiant heroes. That’s the nature of propaganda.

It’s the same with insurgents. The Founding Fathers and the Revolutionary heroes such as the Francis Marion, the Swamp Fox, are hailed as heroes. There is not a whole lot of difference in the tactics of Marion and those of ISIS or al Qaeda. Both used terror tactics to achieve a goal of independence. We see it differently only because those tactics when used by ISIS and al Qaeda are an attack on our values and our world view. However, there is no difference. In the American Civil War, Federal Soldiers led by General Sherman raped, pillaged and burned their way through the South. ISIS is doing the same thing in Iraq and Syria. We hail Sherman as a hero for the same actions for which we deem ISIS as villainous and evil.

It’s propaganda. Michael Moore has done nothing more than bring transparency to our hypocrisy and we hate him for it. He’s put a mirror to our face and forced us to peer into our own souls. Sometimes, that viewing leaves us disquieted. This is the nature of what I call Statism. The State wishes us to believe that we are good when we perpetrate evil. We excuse our own excesses. We rationalize our murders and genocidal behaviors. They are evil because they wish that which we do not. It matters not what it is. It only matters that the State tells us that they are wrong and we are right. They are evil. We are righteous. Despite the fact that our actions mirror one another.

Moore is guilty of nothing more than bringing a different perspective to the discussion. We hate him because his perception makes us uncomfortable. That and he is as guilty as the rest of us. He defends or stays silent in the face of the criminality of Obama and the Left. Yet, screams to the heavens when Bush was taking the exact same actions as Obama does now. I am waiting for the Michael Moore treatment of the illegal assassination of Anwar Al Awlaki and his son. Until Moore is as outspoken of the crimes of Obama as he was of the crimes of Bush, I see Moore as nothing more than a Statist propagandist for the Left. I have no respect for the man based on this hypocrisy. That and he is way to intelligent and wealthy to be such an obese monstrosity. He must know that his obesity will kill him.

Such is my belief at any rate.