Joan of Arc (French: Jeanne d’Arc,[2] IPA: [ʒan daʁk]; ca. 1412[3] – 30 May 1431), nicknamed “The Maid of Orléans” (French: La Pucelle d’Orléans), is a folk heroine of France and a Roman Catholic saint. She was born a peasant girl in what is now eastern France. Claiming divine guidance, she led the French army to several important victories during the Hundred Years’ War, which paved the way for the coronation of Charles VII of France. She was captured by the Burgundians, transferred to the English in exchange for money, put on trial by the pro-English Bishop of Beauvais Pierre Cauchon for charges of “insubordination and heterodoxy”,[4] and was burned at the stake for heresy when she was 19 years old.[5]

Twenty-five years after her execution, an inquisitorial court authorized by Pope Callixtus III examined the trial, pronounced her innocent, and declared her a martyr.[5] Joan of Arc was beatified in 1909 and canonized in 1920. She is – along with St. Denis, St. Martin of Tours, St. Louis IX, and St. Theresa of Lisieux – one of the patron saints of France. Joan said she had received visions from God instructing her to support Charles VII and recover France from English domination late in the Hundred Years’ War. The uncrowned King Charles VII sent her to the siege of Orléans as part of a relief mission. She gained prominence when she overcame the dismissive attitude of veteran commanders and lifted the siege in only nine days. Several additional swift victories led to Charles VII’s coronation at Reims.

To the present day, Joan of Arc has remained a significant figure in Western civilization. From Napoleon I onward, French politicians of all leanings have invoked her memory. Famous writers and composers who have created works about her include: William Shakespeare (Henry VI, Part 1), Voltaire (The Maid of Orleans), Friedrich Schiller (The Maid of Orleans), Giuseppe Verdi (Giovanna d’Arco), Pyotr Ilyich Tchaikovsky (The Maid of Orleans), Mark Twain (Personal Recollections of Joan of Arc), Arthur Honegger (Jeanne d’Arc au bûcher), Jean Anouilh (L’Alouette), Bertolt Brecht (Saint Joan of the Stockyards), George Bernard Shaw (Saint Joan), Maxwell Anderson (Joan of Lorraine), Leonard Cohen (Joan of Arc), and Orchestral Manoeuvres in the Dark (Joan of Arc). Cultural depictions of Joan of Arc have continued in film, theatre, television, video games, music, and performances. (from Wikipedia)

Statues of Saint Joan in the Notre Dame Cathedral in Metz and in the city of Metz itself. 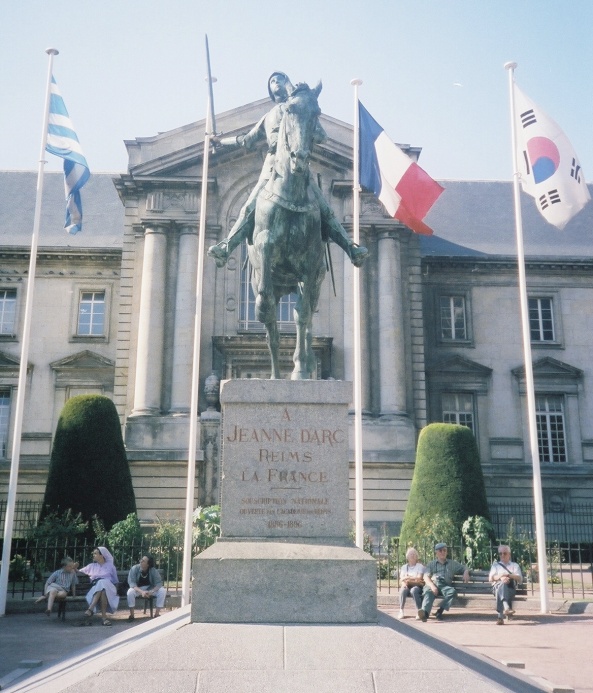 So, 25 years after they murdered Joan of Arc for the crime of being a capable woman, they went back and purged their guilt by pronouncing her innocent and then canonizing her.