Stopping shooting yourselves in the face.

Let us think about this.

Britain didn’t start yelling; “Stop Killing Brits” in World War II and then attack Russia. They made common cause with Russia and America to defeat the Germans.

What have Black people done. Police are killing them in inordinate numbers. Black people start attacking White people on the streets of our cities and at protests. Black people push White people to the side and use strange terms such as “Allies.” I’m not just an ally. As a White American, this is my fight as well. It’s not like I’m against Police Brutality for the sole reason that Police seem to be irrationally frightened of Black people or because Police kill Black people in inflated numbers as compared to all others excepting Native Americans. I’m against Police Brutality because it is a threat to American Liberty. I’m not as concerned with who they target out of proportion or who they fear irrationally. I’m concerned that Police feel that they can murder Americans with impunity by stating that they “feared for their lives” or that they “felt threatened.”

Stop targeting White people at protests. Just stop. It wastes your energy and allows those who are racists and bigots to demean and dehumanize Black people. White people aren’t killing Black people in record numbers. Police are doing that. EVEN BLACK POLICE seem to be strangely and irrationally afraid of Black people on the streets of America.

Stop attacking those who should be standing beside you. Protesting beside you. Stop and think. What White American feels safe joining in a protest by Black people against the Police when the reality is that they may be attacked merely for the color of their skin. This is self defeating. Oh and stop using Michael Brown as an example of Police Brutality and wrongful deaths. Michael Brown attacked a Cop. Period. I believe that the Cop whom Brown attacked was an undisciplined, ill trained thug. Even so, Brown clearly attacked the Police. He precipitated his own death with his own stupidity.

There are better examples. Tamir Rice and Jamal Crawford are clear example of Police Brutality, Police fear of Black people and the oppression that Police bring to the Black community and to America. The Pastor, Terence Crutcher, who was killed recently is another excellent example.

STOP USING MICHAEL BROWN. He did not deserve to die. Neither did the Cop. Both were wrong. That should not have been a death sentence. However, Brown defeats your purpose in the eyes of a majority of Americans. Even Black people to whom I have spoken believe Brown was an idiot.

Some folks such as Shaun King want to pass legislation to make the Police report their murders and killings to the FBI or in a National Database. We can pass thousands of pages of legislation and nothing will change. We can make the Death in Custody Act a reality. We can make a thousand acts a reality. None of that will matter as long as Police have Qualified Immunity.

The Police know that they can murder anyone and get away with it because of #QualifiedImmunity. No Life Matters to the State and the Police are OF THE STATE.

There needs to be top to bottom reform of our Police Departments. Starting with who can join the Police Force. There are too many criminals who are Cops.

End the murderous, oppression and lie that is “I feared for my life.” It’s a well worn crutch of the Policing Community. Police should be disciplined. End the excuse of “I didn’t know the law” for Police. Citizens can’t use that excuse. Why can Police? End the lies of Police. Police can lie to a Citizen and use statements made because of those lies against even the innocent.

Most importantly, make the Police pay for their mistakes. No more taxpayer dollars should go to fund Police legal fees, fines and rulings. If a Cop is found to have committed a crime, let all fees and fines come from the Police themselves and not the Taxpayer.

Finally, disassociate Police Unions from Politics and from City Hall. Police Unions are nothing more than extortion and criminal protection rackets. That #ThinBlueLine needs to be destroyed. It is a criminal organization. 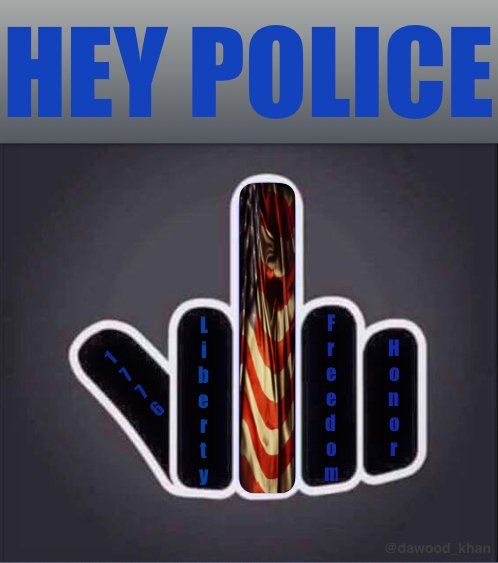