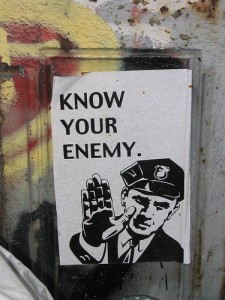 Hey there! How ya doin’?

Lots of us out here empathize with you. Lots of us have actually sided with you. However, when you decide that directing violence against random White people simply because they are White People is the right and proper thing to do, you lose all of the support and empathy.

The people who did this to you are YOUR community leaders. The person who killed Mike Brown is a Police Officer. Random White Dude walking down the street did not kill Mike Brown. I realize that passions are high. At times such as these, it may seem that it is you against the world. I say to you that it’s not you against the world.

There are Americans out there who agree that there are issues at hand here that need to be resolved. You targeting people who have done you no harm makes any kind of resolution or real conversation impossible. Be rational. Don’t be complete fucking idiots. Think before you act. Stop targeting businesses owned by regular people.

I can’t, for the life of me, understand why you have not staged “sit-ins” and such at your local city, county and State

Yes, that includes Barack Obama. I know this is difficult to reconcile but while you are attacking random White guy just because he is random White guy, the Federal Government is militarizing your Local and State Police and making possible, ney making it certain, that your local police will treat you not with the respect of a citizen but with the disdain of an enemy combatant. Barack Obama has done much to further the programs that are militarizing our Nation’s Police Forces.

You can, if you wish, continue to  blindly support Obama as he makes your lives harder, oppresses you at the hands of Billionaires and lies that he’s “here for you” and that he’s “surprised and angered” by the situation. However, he’s not. He’s a part of the system that had led you to this moment. Hillary Clinton, Jeb Bush, Mitt Romney and the rest of our politicians stand right there with him against you and against the rest of us.

I know. Barack is Black. It was a proud moment. However, he’s not your friend. Any more than the criminal who steals your last few dollars is your friend. He’s a politician. He’s no different than George W. Bush.

So, stop targeting random White dude who is just as much a pawn of the State as are you. Direct your angst against the Government. Demand change. Real change. March against them.

Join with your fellow pawns (White, Latino, Asian & Arab Citizens) and march against your government. If you allow them to divide you by fomenting racial angst instead of political angst, you are already defeated.

Your government has betrayed you…from the President on down to your local council person.