Equality is a sham.

Equality is discrimination against the talented and driven.

Is a Soldier in the United States Army treated the same as a General?

Is a Mayor treated the same as a homeless person?

Is a checkout clerk treated the same as a manager?

Is a brilliant scientist treated the same as a five year old?

Is a #1 NBA Draft selection treated the same as an undrafted Free Agent?

Is Hillary Clinton treated the same as Monica Lewinski?

Humans should be treated with dignity. We should all be exposed to equal opportunities.

Education is there to be had for the citizens of Baltimore. I can no more force parents and Bloods and Crips to ensure that the children of Baltimore take advantage of said education any more than you or Obama or Bush or Hillary or the Mayor of Baltimore.

The Federal Governments War on Drugs is also an equal opportunity offender. It legislatively criminalizes certain drugs. Everyone has the opportunity to abide by these idiotic laws and prohibitions.

No one is forcing a Black person, an Asian person or a White person to become involved in the drug trade or to purchase drugs.

Once a person becomes involved with drugs, equality shifts. White people are less likely to be prosecuted or even accosted by a State Thug (Police) than Black people. The affluent are less likely to serve time than a poor person.

And so on and so forth.

We are all born. At that point, we are more or less equal. From that moment on, equality is an illusion that can only be forced upon us coercively via Statist intervention.

For us all to be equal, we must all be in some way diminished.

You have no RIGHT to the labor of another. You have no authority to demand that another human being do your bidding.

You do have the ability to contract[ing] for the labor of another.

Both parties must agree to the contract.

You have no right to the other parties agreement.

Except via the coercion of the State. If the State deems that you have a right to the labor of others, then you have a legal right but not a natural right.

This is where you err on the side of despotism.

If you wish to grant the State those powers on your behalf, then you forfeit all right to complain about items such as institutional racism.

Any right that must be enforced by the State is a threat of violence.

You, who are arguing for these legal rights, are arguing in favor of the Police who killed Eric Garner and every other victim of the State.

Your desires and actions are no better than that of the Christian bigot who irrationally (based upon his misinterpretations of the message of Christ) discriminates against Homosexuals or Black people. I would argue that these actions are worse. You are essentially demanding involuntary servitude based on your beliefs that people should not discriminate when, in fact, we all discriminate to one degree or another.

I’m not certain that many have thought this through to its logical Statist conclusion. 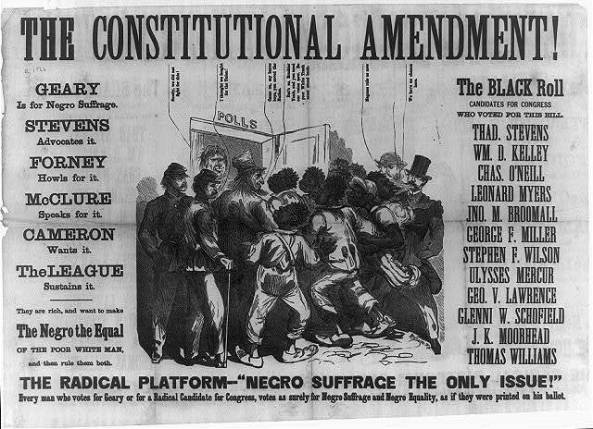 Barack Hussein Obama will be the next POTUS.  The latest polls show he is ahead with an estimated 350 electoral votes to around 180 for McCain.

What does this mean?

#1  The world will have to stop their decades long double standard of judging America a racist Nation.   Perhaps they will take a look at themselves for once.  Racism is alive and well in the world.  Whether it be the various genocides of Africa or the Euros and their Antisemitism or Asia and their one million ethnic hates or the Middle East and their hatred of all peoples not Muslim and their special hate reserved for the tiny nation of Israel.

(*Note:  I do not believe that all of the peoples of any of these regions harbor these hatreds. )

Of course, not all of the peoples of these regions are guilty but many of them love to point to the US and use us as justification for their hates and violence against minority peoples.  Black people in America will have to start dealing with a new reality.  A Black man in the White House ends many arguments that some folks like to use against White people.  Without the white vote, a Black President is an impossibility.  Discrimination will always exist.  But it can no longer be an excuse.

Unquestionably, Iran and their “dear leader” Ahmadinejad will push for Nuclear Weapon capability.  He knows that Barack Obama will seek to solve the issue diplomatically.  Obama will not dare seek a military resolution to the problem.  It will probably take a nuclear strike by Iran to get Obama to take a military stance on Iran.  Not that I think that this will happen.  Iran wants Nuclear weapon capability to offset the perceived threats of the US and Israel.  I don’t think anyone but a mad man will strike first with Nuclear missiles.  It would mean a sure death to the people of that Nation.  I don’t see Iran secreting nukes to Hezbollah either.  Everyone who pays attention to the Middle East knows that Hezbollah is the puppet of Iran.  It would be too obvious.

I think that we should unilaterally end all sanctions against Iran.  Our efforts for reform in Iran should be positive.  Aimed toward the people of Iran.  Same with Cuba.

I’m hoping that Obama keeps his promise and seeks to wean the US off of oil and other energy sources in the Middle East and other unstable areas and regimes.  I truly look forward to the day that we pull our support from the corrupt Wahhabi regimes of Saudi Arabia.  The Wahhabi are the genetic source of all terror groups of Sunni Islam.  The Wahhabi are also in the DNA of the Shi’a strain of terrorism.  Saudi Arabia is the funding source for Wahhabism world wide.  The House of Saud is the enemy and they are secure in the Lincoln Bedroom of the White House.

Hopefully, Obama shows them the door.  Let them cozy up to China and India and let those countries defend that corrupt and evil regime.

Some good could come of the Obama Presidency.

I think a Democratic victory in the White House will go a ways further towards instilling confidence in the market as well.  Will it be enough to push our economy on to the road to recovery.  Only time will tell.  Let’s hope it does.

I don’t think that Obama will be truly foolish enough to pull the troops out of Iraq too swiftly.  I just can’t believe that he would be that foolish.

If Obama wins his second term, I think that al Qaeda will attack.  Obama will return to the empty threat/speech foreign policy of Clinton.  The Wahhabi will attack the periphery at first to test the resolve of Obama and his State Department.  If Obama shows no nerve.  If he shows no willingness to strike back in a concrete manner, al Qaeda will eventually strike into the heart of America.  Perhaps a dirty bomb in a large city.  They’ll test him first in a place like Afghanistan or Kuwait.  Next, they’ll try ply their trade against a soft target in a place like Djibouti.  If Obama shows no resolve.  If he gives a speech with empty threats and follows up with nothing or aimless strikes.  The leaders of al Qaeda will begin to plan their next 9-11.

People of Liberal persuasion will deny this to their death.  But it will happen.

Either the last year of the Obama first term or the first year of the 2nd Term will see a strike.  If Obama is truly a Carter/Clinton idealistic type.

I hope that he truly is to be good for America.  I am hoping that he is as good as his followers believe. He won’t get my vote, but once he is in office he has my support.  I will wish him success.

Worst case scenario:  Obama turns out to be a Carter re-tread and 2012 sees a Republican take back the White House with a clear mandate.

For now, Obama has a mandate for change.  Here’s hoping he does something good with it.