Unny, Bupe and I took a taxi over to Sukhumvit Soi 11 to eat some Mexican food at Charley Browns.  The food was decent.  A bit bland, but, near enough to Mexican food so as to please te palate.  Afterward, Unny and Bupe were craving Oysters and Somtam.  So we headed over to Soi Cowboy.

Soi Cowboy is one of the “SexPat” areas of Bangkok.  Go Go Bars and Prostitutes galore.  Everything an old guy who can still get it up with a viagra induced libido could desire.  And the old fellas were out in force as usual.  It’s hilarious walking around the SexPat areas.  You see everything there.  Let your imagination soar.  It’s probably there or right around the corner.

As we pulled up to Soi Cowboy, a group of men came running out.  Must have been ten or twelve of them.  Once we got to Sams 200o–the bar that serves Oysters, we were filled in on the details of all the excitement.  It seems that yesterday an ExPat attempted to depart Spice Girls Go Go Bar without paying his bill.  The bouncers ganked him up and proceeded to rough the guy up.  The next day or that same night, Mr. (s)Expat paid a group of Thai hooligans to go to the Spice Girls Go Go Bar and raise a little hell.  This was the group that we saw running out of Soi Cowboy as we pulled up.

There was an air of excitement on Soi Cowboy, but, for the most part, it was just another day for the gals on the strip.  I assume that they’re used to the violence and insanity that consumes their lives and the strip called Soi Cowboy.

I just laughed and yelled; “Get some!”  And laughed some more.

Later, the police showed up and probably took statements.  Nothing will come of it, of course.  I’m sure the hooligans were attached to some organized crime element in the city.  The police will be paid off or more than likely will let it quietly subside and go away.

That’s life in the big city.  Life on Soi Cowboy.

Excitement.  Insanity.  Laced with violence and sex and anything goes… 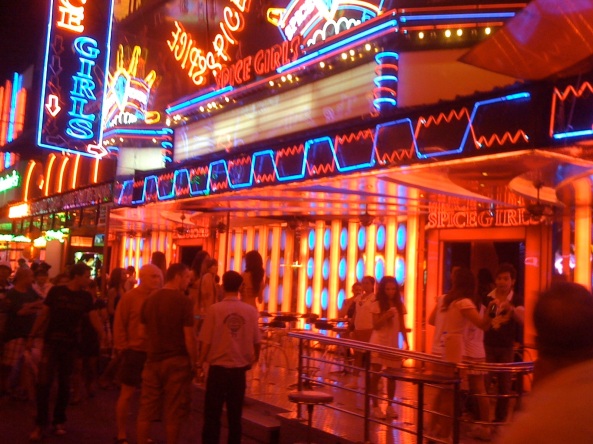 Took those two snaps with my iPhone.  Decent little cam on the thing.