Too bad.  I wanted to take Malalai and Cierra there.  Well, we can still take them to Cambodia.  They’ll just have to hang out at the pool.

He’s black and that is historic.  And, well, that seems to be the only qualification that he needs to be President.  If you are a Liberal.

I’m reminded of Chris Rock anytime an Obama disciple starts to froth at the mouth about the Obaminator.  Inevitably they say something that amounts to “he speaks so well.”  I can’t help but laugh.

If one of them can name some significant piece of legislation that he sponsored and ushered to passage.  Name something that he improved in Chicago as a community organizer.

He’s said to be “bi-partisan.”  Name one time that he crossed the aisle and voted against his party.  He is THE most liberal Senator.  The #1 liberal in the Senate.  What about that speaks to a bi-partisan attitude.

He’s supposed to be eloquent.  I’ve never seen his eloquence away from a teleprompter.

But hey, he’s Black.  And that seems to be all that matters.

Barack Obama just isn’t one of them.  But hey!  He’s Black.  And that’s historic.  And that seems to be enough for the Democratic Party.  Too bad he’s Jimmy Carter Redux.  I’m sure he’ll be just as successful if he wins.

If we are who we were waiting for then we are all in trouble.

P.S.  All of you Ultra Liberals out there.  I know what you’re going to say now.  You’ll call me a racist.  Blah blah blah  Why will you do this?  Because you have no other argument.  In a Presidential race that the Democrats should win running away, you picked an empty suit as a candidate and he may not win.  That must make you guys feel stupid.  Next time, don’t pick a Marxist wannabe.  America doesn’t want to be a Socialist paradise.  And if that is your desire.  Swim to Cuba.

I know.  I know.  If you don’t support the Obaminator, you must be a racist.  That can be the only reason.  It can not be that he is a far left liberal who will take America back to being a Carter Era joke on the International scene. That’s change that I can do without.

That’s Obama in December.  Waving goodbye to National relevance.  Joining Mondale, Dukakis, Gore and Kerry in the list of also rans.  That will be a historic moment as well.

America’s first Kaliph. That would certainly be a “change.” 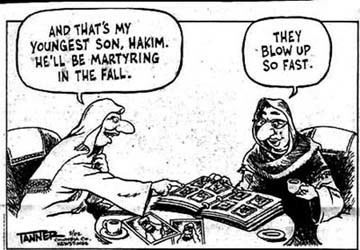 Obama can change America so that this mentality is common here as well as in the Middle East.

Change. We Can. Hope.

I agree. We need a change in our Politics. But socialism of the brand that Obama espouses was tried in Eastern Europe and Russia. It didn’t work. As a matter of fact, Ronald Reagan finally ushered it down the aisle and into the dust bin of history.

It should not be revived. No matter how charismatic it’s proponent may be. Obama should be allowed a final resting place near Karl, if he so desires. Marxism is dead. Let it remain so. I don’t want Obama telling me how to live. I don’t care if it’s through collectivism or Islam.