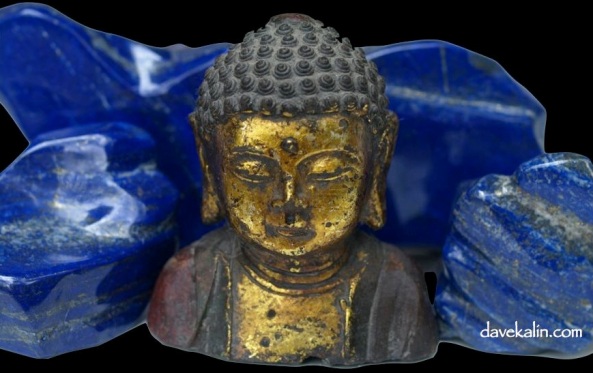 I’m fairly certain that this is not an “antiquity” of Afghanistan.  However, I’ve carried it in and out of Afghanistan several times since I bought in the bazaar at Bagram Airfield in November of 2003.  It’s a sort of totem.  My bringer of fortune.  I had it with me at Bagram, Camp Eggers, Camp Phoenix, Camp Stone and Camp Alamo.  I’ll probably have Unny Fed Ex it to me when I get back to Camp Eggers.

I’ve never seen another bust like it in any of the other bazaars.  I’ve been to quite a few of them.  I suppose it is a one of a kind.  It does have that look as if it was sliced off of some larger piece.  As if at one time it had a body and wasn’t just shoulder and head.

I’ve flown out of Afghanistan with it several times.  The Customs and Border Police have stopped me each time and asked me; “Is this old?  Is it antiquity?  Where did you get it?”   The first time, I told them that I bought it at the bazaar at Bagram.  Later, I lied and told them that I purchased it in Thailand.

Who knows?  Perhaps I have a genuine piece of ancient art on my hands.  I seriously doubt it, though.

The bust has had many admirers over the years and I’ve been offered various amounts from folks to hand it over.   I can’t do it.  It’s the first thing that I bought in Afghanistan.  If I have my way, it’ll be the last thing that I ever hold and it will accompany me to the grave.  It’s been with me for nearly a decade now.  Hopefully, it will be with me in life another 40 years and then it will rest with me in eternity.

Unny will keep it for me while I’m in Afghanistan this time.  It’s fortune will shine upon her and our endeavors in the Land of Smiles as I find new fortune back in my old haunt.

Camp Phoenix, on the outskirts of Kabul, is run by US forces, with some NATO member nations maintaining a presence there.

It is also a base for the Afghan army, which is being trained by international forces in the hope it can take over the responsibility for fighting the Taliban insurgency.

The camp occasionally comes under attack, mostly from rocket and mortar fire, though without casualties.

I see this happening all the time.  The Associated Press (AP) picks up a story written by some idiot who never leaves the safe confines of his hotel room or villa in Shahr-e Naw or Wazir Akhbar Khan.  These morons report as if they are on the scene.  They mix up place and location.  They hack together stories based on second hand information and pawn it off on the public as gospel truth.  The guy who wrote this story should be fired.  He printed a hand full of lies and sent it in as if he had actually visited the places about which he wrote.  A bunch of older hacks will probably award this poltroon a  Pulitzer and they’ll all sit around in a smoke filled chamber and congratulate each other on their bravery and literary brilliance.

I’ve seen this kind of irresponsible writing of lies and half truths all over the globe.  Korea when Kim Il Sung died.  When Qandahar was attacked.  In Kabul after various attacks.  In Herat after suicide bombings.  From whom do these morons obtain their “facts?”  Dr. Suess?  The Brothers Grimm?  Hanna- Barbera?  Does anyone back home in America fact check or edit their hotel room ramblings?

I read the newspaper and online journals and I often wonder if these folks are even in country.  What happened to reporting from the front?  These guys are reporting from the whorehouse or from the tea parlor.  They’re definitely NOT on the scene.  Not here in Afghanistan.  I can assure you of that.