“I could have done it today, but I’m giving these guys that are in front of him the room that they need to be able to miss shots,” Calipari said.

When asked why he isn’t giving more PT to Dontiae Allen. Allen, who average 40 plus in high school and redshirted last year, has been glued to the pine this year. Allen will be another in a long line of transfers out of the program who go on to become scoring threats at places like UCLA, Arizona and Illinois.

Why? Because Cal won’t play or develop his non Five Star players.

And that has led the Kentucky Wildcats program to where we are today.

1 win against a nobody and 4 losses against real competition and 1 loss to Richmond. Thank the Gods the Detroit Mercy game was mercifully canceled. Cal’s Golden Boys may have been given the room they need to lose that game as well. Kentucky may not win another game this year. This team would probably lose to Robert Morris. This team is worse than the Gillispie teams. Cal has lost his way.

And Cal will spend all year spewing stupidity such as that above and wondering why his program has not continuity.

Another year like this and I’ll be ready to part ways with Cal. 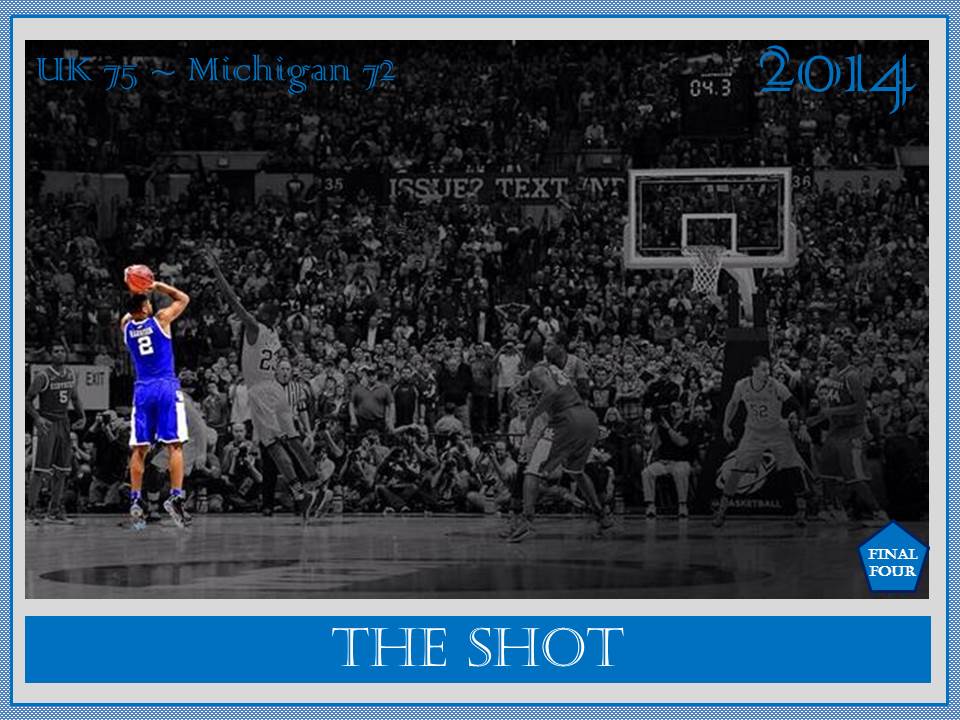 I’ve got a signature from every Coach except for Calipari.  I’ve tried to get a Cal signature several times but something unfortunate has always prevented me from obtaining it.  I don’t want to purchase it.   Rupp is the only one that I have purchased thus far as he was long dead by the time I was cognizant of Kentucky Basketball.

Vandy guard Jenkins proves unable to shoot over the defensive presence that is John Wall.

In the closing seconds of the game, Jenkins attempts a 3 point shot.  John Wall gets a piece of it and the shot is off the mark.  More last second heroics by Wall who had made the winning shots for Kentucky only seconds earlier.

This Kentucky Team refuses to lose.  The swagger is definitely back at Kentucky.

With the loss to Notre Dame in the NIT, Billy G is gone.  So say the talking heads. It’s all over the message boards. I think UK is making a mistake.

I think given the time and space to grow into the job, Billy G would have made a fine coach at UK.  Let’s face it.  UK has no Roy Williams waiting in the wings.  That may never come to pass now.  In years to come, UK will regret this day.  Billy Gillispie is going to go somewhere and take some team to the Final Four.  He’s going to win some Championships.   And he’s going to do it with a team of players that he recruited.

UK and it’s fans are going to look on ruefully and be left with thoughts of what might have been.  We may be looking on happily.  Having recently watched our Team win a  Championship with Calipari or some other coach.  If the UKAA makes the right hire post-Gillispie.  Or we make look on wistfully.  Wishing that we and the UKAA  hadn’t made the mistake of a precipitous decision to fire a coach who just needed a bit of time to turn it all around.

I’m a bit saddened by all of this.  Two years ago, I was excited.  It was the end of the Tubby era.  I thought we would enter a Golden Age with the gunslinging, Dr. Pepper drinking man from Texas.  I had a rug made in Herat, Afghanistan and mailed it back as a welcome gift to Billy Gillispie.  I wonder what will become of that rug.  Will Gillispie take it with him or leave it for the next coach.  It won’t be something that he will look on with fond memories if he takes it with him.  For all I know, it winds up in the garbage.  Hopefully, he’ll pass it on to the next coach if he doesn’t want to keep it himself.

Both sides have made mistakes.  Both sides need to step back and re-evaluate before they move on.  Billy G needs to sit down and realize that UK is not just any other job.  Mitch and Pres. Todd need to realize that they have a coach who can win and who needs the time to make the transition from the small pond to the Big Blue Ocean.  The fans need to make this same realization.  G needs to learn how to manage this program and be it’s caretaker and not only it’s coach.  Patience is called for here.

Something just doesn’t feel right, though.  And the truth doesn’t seem to be out there.  Those outside the circle may never know the truth.  Certain people have an invested interest in keeping the truth away from the general public.  Such is always the case.  Some folks are saying that they are only telling “10% if the story.”  Perhaps, there is a lot more out there concerning Gillispie that we don’t know.  If it’s in the interest of the UKAA for it to come out, it will be made plain.  If not, we will never find out.  Perhaps, that’s simply damage control.

Lots of the things that people are complaining about seem to be small to me.  If Gillispie were winning already, he’d be forgiven most of this.  But since it’s taking longer to win, he’s been hit hard.  I don’t think Gillispie realized how big of a jump he made and how fast he was expected to produce.

It seems as if the regretful decision has been made.  We’ll see.

I know this much.  If Mitch doesn’t hit a GRAND SLAM Coaching Hire this time around.  He’s next!  If not, Lee Todd should be.

The next phase of UK Basketball, begins Friday.   Will it be the beginning of a new Coaching Era or an extension of the ongoing era.  I’m hoping that G stays on and leads UK to many victories.  I’ve never liked the media anyway.

They’re out there. Thousands of folks running around. Rumor mongers galore.

I’ve heard that Gillispie is out as soon as he loses the last game of the year.  Because everyone or most everyone is convinced that he will lose.  Probably to Creighton.

Miller, Meeks and Patterson will transfer or go to the NBA if Gillispie returns.  Liggins is gone.  Mike Porter is going to graduate early and leave no matter what happens because of family issues.  His wife is about to have their baby and Mike needs to get a job and support his family.

Calipari is already on board

Pitino is in the wings waiting.  But he might be on his way to Arizona as well.

Donovan has changed his mind [again] and wants to create his own Camelot.

90% of the Big Blue Nation is supposed to want Billy G gone at year end.

A Big time Booster who owns a bank or two is financing the buyout of Billy and the hiring of Calipari.  Calipari supposedly wanted to come last time but was blocked by his contract and boosters at Memphis.  This time.  Nothing stands in his way.

I have no idea what is going to happen.  G is still recruiting as if he is staying.  The JUCO kid, Konner, just signed and he’s supposed to be the real deal.  Instant Impact.  As opposed to flighty JUCOs Galloway and Harrelson.

There are so many rumors floating out there that I can’t keep up with them.  Bloggers are going crazy.  Sportswriters are swearing that he’s gone.  Bromley, Bozich, Seth Davis have all come out stating that G is as good as gone.  Citing “sources close to the program” or “sources within the program.”

And it’s not that Billy G is losing at a clip that makes Tubby look like a winner in his last two years.  It’s that Billy G doesn’t seem to understand the role of a Kentucky Coach.  He seems to think that he can coach and play his X’s and O’s and it ends there.  He doesn’t seem to understand that he’s expected to BE the program.  He’s supposed to kiss babies and shake hands and represent the program in the news.  He’s got to glad hand the boosters and give autographs.

Then there are the rumors that he’s all over the parties on campus doing his best Bruce Pearl impression.  These rumors are completely unbelievable.  In this age of instant celebrity and sleuthing/outting via Youtube and webcams and cellphone cams and video recorders, there would be a record of any shenanigans.  Thus far, NADA.  Not a single video or picture of a drunken Billy pawing on College Frosh at Sorority or Fraternity parties.  Not a single pic of a sloshed Billy G.  Not one.

But that doesn’t stop morons from spreading the rumors or the gullible masses from believing every and anything that they hear concerning these rumors.  It seems that some people live to tell.  And the rowdier the rumor, it seems the more people are willing to believe it.

If Billy goes up to Omaha and his boys lose, next week is judgement week.  The dirty truth comes out.

Will deep pocketed Boosters buy him out and bring in a big name like Calipari?

Is Pitino the “once and future” coach of the Cats?

Will Donovan pull a Roy Williams and come the second time he’s asked?

I have no idea.  We’ll know soon enough.

My favorite rumor is this gem from you tube:

DUI got caught drinking with ramel bradley while he was a senior last year… tisk tisk silly redneck i guess thats what you’d expect from a school with a hick tradition like kentsucky.