The DemoKKKratic Part of America is a terrorist organization.

If there is one thing that Nancy Pelosi and her gang of thugs at the Democratic Party hate, it is truth.

Lebron has the RIGHT to speak his mind.

He does not have the RIGHT to propagandize and mislead the people of the American Republic.

At least, no more fearful of the Police than the average White Person or Asian person or Latino person.

“If you’re sitting here telling me that there was no way to subdue that gentleman or detain him or to just … before the firing of guns, then you’re lying to not only me, but you’re lying to every African American, every black person in the community, because we see it over and over and over,” James declaimed in a foolish, half literate and moronic rant to reporters Monday.

Somehow, I think not.

I am one of the loudest, most vociferous critics of the Police in the United States of America. I’ve been disowned by half of my family over my fervent criticism of Law Enforcement.

Lebron James leaves his house with a Security Phalanx that would shame Alexander the Great.

He and those ill informed lazy, moronic, fucktarded, idiots like him are contributing to the anger and violence in America today. Lebron James is culpable for the murders of innocent Americans – Black, White, Asian, Hispanic, Arab, etc.

The Relationship between Black and White people in America will not be normalized and will continue to be racially stratified UNTIL a Black Person can be a Republican and NOT be called an Uncle Tom.

Democrats profit from racism whether real or contrived.

Racism will not be a relic of the past until Democrats stop using it as a Wedge Issue in Politics.

Being told that you can’t get a job because of your skin color especially if you are White.

Being told by the descendants of Spanish Colonizers that YOU are a colonizer because you are White.

Yet, we have Alexandria Ocasio-Cortez defaming people with White skin while she is the descendant of the bloody Spanish.

Alexandria Ocasio-Cortez is a descendant of colonizers, murderers, rapists and conquistadors.

The Big Thing on the Left now is the attack on Lin Manuel Miranda and his Hamilton play.

Hamilton is accused of being a slave owner, though, there is no evidence to support this.

Hamilton is then said to have been “complicit in the system” regardless of whether he owned slaves or not.

Well, I got some news for you folks.

Every Great African Power for the past ONE THOUSAND YEARS is complicit in the same system.

That includes Egypt, the Nubians, the Mali Empire and Mansa Musa.

If you are angry that your ancestors were enslaved, buy yourself an airplane ticket and head on over to Africa. If it weren’t for Africans selling Africans, the massive slave trade to BOTH the East and Islam and the West and the Americas would not have been remotely possible.

You want to talk about original sin.

The original sin belongs to the Africans who sold the ancestors of the millions upon millions of African whom they enslaved and sold for massive profit.

Generally speaking, the average Homo Sapiens cares about a small circle of friends, family and acquaintances. Outside of that circle, everything grows abstract.

If a White person has Black friends, that White person will have some awareness of the trials of being Black in America. If they do not, they will not. Nor will they generally think about it.

This is the same with Black people, Asian, Arab and other people.

Which brings us to the challenge of #BlackLivesMatter. By focusing on such a specific group of people, you have left out a majority of the population of America. Those with Black friends, family and acquaintances will care to some degree. Those outside of the circle may show some empathy but will expend zero energy for a cause outside of their circle of awareness and empathy.

The use of BLACK in the term is self defeating.

And then we have this odd demand of those who listen to Hip Hop and Rap for Cultural Awareness.

Do Black people concern themselves with the culture of other peoples when they listen to classical music, Persian or Arab music, or, even, Shakira? If not, why is it incumbent upon White people to know the history of Hip Hop or Robert Johnson when they listen to this music.

Most people listen to music that moves them. Very few people delve into the lives or histories behind the music.

It doesn’t help matters when Black Americans claim pieces of history for themselves that have occurred all across the planet. For instance, braided hair. Black people in Africa and Slaves are not the only folks in history to have ever braided their hair. This goes for dreadlocks and a whole slew of “Black Culture” claims.

“But now that I’ve been speaking out and saying that mass incarceration is the new Jim Crow, now all of a sudden the Clintons are saying, ‘oh wait a minute, we are going to be back on the other side of this issue right now.’” 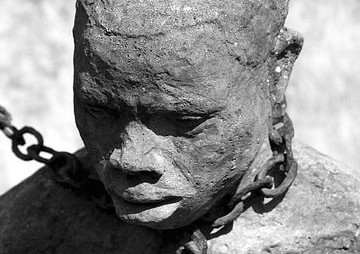 The African American under the Clinton Boot

The Clintons injected steroids in the New Jim Crow. It is amazing to me that Hillary Clinton, Democrats and other Hillary supporters have the unmitigated gall to claim that others are racists.

Why the fuck Black Americans supported Hillary is beyond me. Bill Clinton is the one who amped up the Drug War, Incarceration and Police Militarization that has led to the exact complaints of #BlackLivesMatter. This is exactly why I believe the BLM movement to be nothing more than Sorosian Propaganda. If BLM were really an intelligent, meaningful movement, there is no way that they would have supported Hillary Clinton. They’d have supported Rand Paul, Bernie Sanders or Gary Johnson.

You want to talk about cognitive dissonance. Black Lives Matter Activists supporting a candidate like Hillary Clinton is the very definition of it.

Black Lives Matter as a movement will not be taken seriously until they learn to differentiate between a Blue Thug murdering a Citizen and a Cop killing an armed criminal. Certainly, the Blue Thugs are more prone to killing Black Citizens. Yet, it crushes any credibility of the movement when they demonstrate against a Cop who has shot an actual criminal who actually had a firearm and who actually pointed it at a Cop, refused to drop the weapon or shot at an actual Cop or a Citizen.

For morons who keep asking about Black on Black crime, yes, this is another important issue. Yet, it is a separate issue.Black on Black crime is Citizen against Citizen. Police Brutality is a State Power issue. When the State assumes the power of life and death and does so with such ease as do Police, we have an issue. A huge issue.

The lesson that everyone is missing in all of this is that NO LIFE MATTERS to the State. The State uses the Citizens and others as a tax base and to legitimize itself via elections. The State doesn’t care about Black lives or White lives or any lives. It cares only that it continues to exist. Once you realize this, things start to make sense.