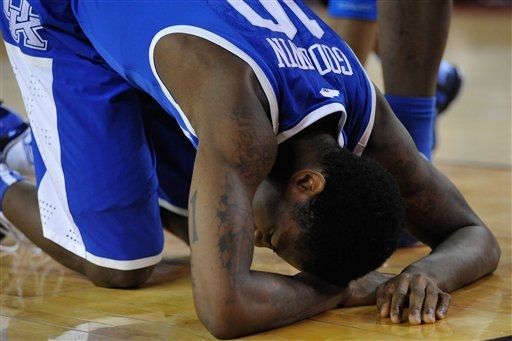 ”There’s no way we should lose to Georgia.”

That’s how the season has gone.  There’s no way that Kentucky should be this bad.

I have a buddy who is always tagging me with comments about the Kentucky “Mildcats.”   This year, the tag fits like it was tailor made. 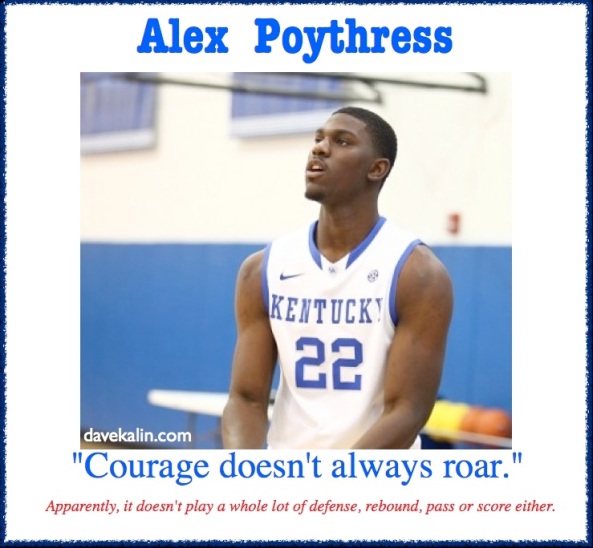 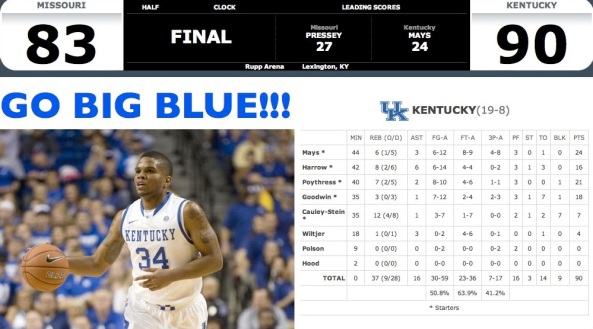 LEXINGTON, Ky. (AP) — Julius Mays’ eight points in overtime, including four clinching free throws in the final 33 seconds, helped Kentucky get the important victory it needed to bolster its NCAA tournament chances, beating Missouri 90-83 Saturday night.
Mays made six free throws in overtime and scored 21 of his 24 points after halftime for the Wildcats (19-8, 10-4 Southeastern Conference), who needed a `quality’ win to go along with their triumph over then-No. 16 Mississippi last month. Kentucky got it by holding serve at Rupp Arena over Missouri (19-8, 8-6) in the marquee game on ESPN College Game Day, and the Wildcats’ backcourt was key in beating the Tigers.
Archie Goodwin scored all 18 of his points after intermission while Ryan Harrow added 16 with eight rebounds and six assists. That helped offset Phil Pressey’s 27 points and Missouri’s determined effort that forced overtime.
Instead, the Tigers saw their road woes continue in falling to 1-7.
Alex Poythress added 21 points for the Wildcats, who improved to 2-1 since losing freshman center Nerlens Noel to a season-ending knee injury.
Kentucky shot 30 of 59 from the field (51 percent). Missouri finished 33 of 76 (43.4 percent).
Alex Oriakhi added 16 points and Laurence Bowers 13 for the Tigers.
The tight ending typified the game’s importance for both teams hoping for at-large tournament bids. Though Missouri seemed to be in better shape than Kentucky, Tigers coach Frank Haith said there were many teams “in the same boat,” needing a substantive win.

I’m not buying the “they’re young” excuse. When I was the same age as Goodwin and Poythress, I was in the Army. When I screwed up or didn’t give effort or when I didn’t learn to do things correctly, NCOs got in my ass.

They got in my ass. All up one side and down the other. They brought pain. They worked me from sun up to sun down.

There was no “youth” excuse.

This isn’t high school anymore. This is life.

Suck it up and get your shit together OR fail.  It’s all up to them.

Excuse me if I don’t feel sorry for these spoiled “kids.”

Poythress and Goodwin have really done damage to their draft stocks the past few weeks. Both were considered by scouts to be Top 10 picks before the season began. Poythress still clinging to the end of the lottery. Goodwin now out of it. Cauley-Stein flubbed his first game starting in place of Nerlens Noel. Scouts love the upside, but he’s going to have to produce to stay in the lottery.

It is one helluva a weak draft when either of these three guys are close to the lottery.
I can almost understand Willie Cauley-Stein because of his size.

Poythress and Goodwin?  What do they have? What have they shown? Well..aside from an ability to lose against anything resembling a competitive team?

Goodwin and Poythress remind of me of the Team Turmoil days of Carruth, Chiles and Parker.  Goodwin’s signature move is a rush to the rim and a toss in the air.  Where it lands, Goodwin don’t care!  Poythress is rumored to have stated that he doesn’t give a damn where he goes in the draft, he is not staying.  Apparently, Poythress is not happy with the efforts of a Team of Coaches who have had a run of NCAA Success and NBA Lottery Picks unlike any other program in NCAA History.  Poythress “knows” that he can do as he pleases and take 4/5ths of each game off and still be good to go.  He’ll still play ball….SOMEWHERE!!!  Where?  Apparently, he doesn’t care.  I’ll go with Europe as my guess.   Maybe Turkey or Israel.

Neither Goodwin nor Poythress will ever make it to a second contract in the NBA. NEVER.  If Poythress is selected in the Draft this year.  I doubt that he’ll survive his first year without long stints in the NBDL.  I wonder how he’ll feel about his College Ball when he’s in North Dakota or Bumfcuk, Indiana playing ball with other NBA rejects.

But they are both too ignorant to see what they are doing.  Both are too foolish (full of themselves) to realize that it’s the second contract and not the first that matters.

I still can’t believe that an NBA team would waste money on either of these two.  But I guess the NBA has to have losing teams as well as winning teams.  For the Great Talent to rise and be enjoyed fully, there have to be duds and chumps to sink to the bottom and show us how talent can be wasted.

In a Game so ugly that I thought Billy Gillispie had invaded Coach Cal’s body, UK went down to a turrible Tennessee team by 30 points.

More effort needs to go into getting Poythress on his game.

There is no way that either of those two are ready to go Pro.  That doesn’t mean that they won’t or that some idiotic NBA team will not draft them.  Who knows what will happen?  Is Isiah Thomas still an  NBA GM.  He’ll draft both of ’em.

Noel going down is apparently the end of the whole season.

Unless Uncle Julius can find a way to bring these guys along with him.  Mays needs Oz to bring this team some HEART!