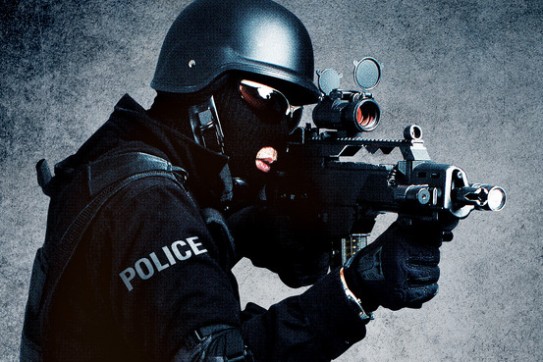 Is this the Police or the Army?

On Jan. 4 of last year, a local narcotics strike force conducted a raid on the Ogden, Utah, home of Matthew David Stewart at 8:40 p.m. The 12 officers were acting on a tip from Mr. Stewart’s former girlfriend, who said that he was growing marijuana in his basement. Mr. Stewart awoke, naked, to the sound of a battering ram taking down his door. Thinking that he was being invaded by criminals, as he later claimed, he grabbed his 9-millimeter Beretta pistol.

The police say that they knocked and identified themselves, though Mr. Stewart and his neighbors said they heard no such announcement. Mr. Stewart fired 31 rounds, the police more than 250. Six of the officers were wounded, and Officer Jared Francom was killed. Mr. Stewart himself was shot twice before he was arrested. He was charged with several crimes, including the murder of Officer Francom.

The police found 16 small marijuana plants in Mr. Stewart’s basement. There was no evidence that Mr. Stewart, a U.S. military veteran with no prior criminal record, was selling marijuana. Mr. Stewart’s father said that his son suffered from post-traumatic stress disorder and may have smoked the marijuana to self-medicate.

Early this year, the Ogden city council heard complaints from dozens of citizens about the way drug warrants are served in the city. As for Mr. Stewart, his trial was scheduled for next April, and prosecutors were seeking the death penalty. But after losing a hearing last May on the legality of the search warrant, Mr. Stewart hanged himself in his jail cell.

The State is guilty of David Matthew Stewart’s death.  His crime: possession of 12 small marijuana plants in his home.  He didn’t sell the plants. He smoke a bit of marijuana. He had no criminal record. He was a veteran of our other War — on terror.  The government of The United States of America is using drugs to wage a war on American citizens and our liberty.

The State is murdering thousands of citizens in the name of their war on drugs. Why? It is not to protect Americans. This is nothing more than a power grab.  Each year this war is waged equals a further diminishing of the rights of Americans.  Drugs are illegal so that America’s political class can siphon off funds for themselves, amass power and destroy liberty.  This so-called War, started by the criminal Nixon, is naught but a scam on middle America and it’s a crushing weight on the lower poor and minorities of society.

Unfortunately, our citizenry is easily duped. Too many Americans believe the lies of the political class. Too many Americans desire security from boogie men and have no real desire for liberty and freedom for these come with responsibilities.  Americans would rather be told who and what they are and how to live by the State.

America is no longer the land of the free or the home of the brave.

America is the land of the well kept coward, the home of the over taxed slave.

*  Every American should read this book:  Rise of the Warrior Cop   Policemen and women who are being used by the State to murder citizens and destroy liberty should most certainly read this book.