Gates is sounding more belligerent these days. “I don’t think we’re prepared to even talk about containing a nuclear Iran,” he told Fox News on June 20. “We do not accept the idea of Iran having nuclear weapons.” In fact, Gates was reflecting a new reality in the military and intelligence communities. Diplomacy and economic pressure remain the preferred means to force Iran to negotiate a nuclear deal, but there isn’t much hope that’s going to happen. “Will [sanctions] deter them from their ambitions with regards to nuclear capability?” CIA Director Leon Panetta told ABC News on June 27. “Probably not.” So the military option is very much back on the table.

What has changed? “I started to rethink this last November,” a recently retired U.S. official with extensive knowledge of the issue told me. “We offered the Iranians a really generous deal, which their negotiators accepted,” he went on, referring to the offer to exchange Iran’s 1.2 tons of low-enriched uranium (3.5% pure) for higher-enriched (20%) uranium for medical research and use. “When the leadership shot that down, I began to think, Well, we made the good-faith effort to engage. What do we do now?”

But it is also possible that the saber-rattling is not a bluff, that the U.S. really won’t tolerate a nuclear Iran and is prepared to do something awful to stop it.
Read more: http://www.time.com/time/nation/article/0,8599,2003921,00.html#ixzz0tmPRNrwm

A nuclear Iran or someone stopping it.

If Jordan, Egypt, Saudi Arabia and the UAE want Iranian Nuke Programs stopped, why don’t they come out and straightforward ask for it.

I can see why they’re scared. Iran is more likely to use it against them than us.

Saudi could bring China on board.

1. Cheap Oil
2. Peace with Israel
3. Crush Wahhabism and become Sufi Muslim
4. They have to bring China in on it. China must invade Iran.

Potentially, we have the Middle East by the balls with this Iranian thing. Only if we use it correctly.

Would be awesome if this were true to life...

Hell of a statement…

Ya know that there are a few million Iranians who want to do it.

To the United Nations:

Ban Sharia.  Purge this barbaric intellectual and emotional plague from the face of the Earth.  Sharia is nothing more than a throw back to an era of superstition and irrationality.  The world no longer needs this brutal set of laws.  If it was ever needed in the first place.

Take the power away from the despot and place it in the hands of the people.  The People should not fear their Governments.  Governments should fear the people.

Barack and Michelle Obama think that some mysterious band of nefarious evil doing “whiteys” are out there raising bars over their heads.  Yet, Barack thinks that he can deal with madmen like Ahmadinejad and the pedophile king of North Korea.  Barack is a babe in a forest full of wolves.  He’s not ready.  What more proof does one need than the video above.  Barack actually thinks that the Russians want to talk to the US about disarmament.  I don’t see it.  I suppose that he, too, can see into the soul of Putin and the Russians.

Barack wants to unilaterally disarm America. He’s of the same liberal ideology as Carter. He and the rest of the fools who believes that if we smile warmly and disarm ourselves, the rest of the world will love us.

More than that. We must be willing to do these things. We can not shy away from the difficult decisions. Decisions of weight. Obama is not ready for them.

The man wants to shake hands with the devil and doesn’t know the price.

This man can not be President. 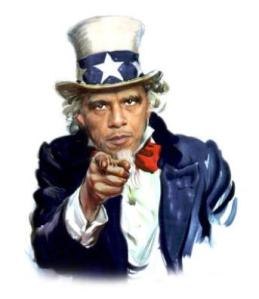 But it seems as though you are the only idiot who doesn’t truly understand the power of words. Especially when they come from the mouth of the President of the United States of America.

Democrats are right to feel upset about President Bush’s appeasement accusation. It is their Achilles’ heel in this election and they know it. The foreign-policy mantra of the Obama campaign amounts to this: Talk is cheap.
Over the next five months we will see the many tentacles of such a strategy emerge and the comeback “that’s political” — as Obama has objected — will be treated with the disdain it deserves. Determining how to deal with the enemies of freedom and democracy is as political as it gets.

The Soviet Union. China. We had no choice but to notice them. They were a reality and their decision and actions had the effect of creating realities.

Iran. North Korea. Lybia. These countries leaders. These are not serious people. Their decisions are usually petty. They are usually destructive. They are more often than not aimed toward a purpose to disrupt rather than to create or assist or build. These are nations with the sole intent of destroying with their actions.

These are Nations that support, create and carry out terror.

If Obama becomes POTUS, he needs to act as if he knows the gravity of his choices. If Iran truly is no threat, as Barack states, then there is no reason to meet with the mad, little Iranian aspirant to mass murder. Yes, I speak of Mahmood Ahmadinejad.

North Korea should be treated as a belligerent state. It should not be rewarded. I think we should back out of the North Korea sweepstakes completely. Let the South and Japan take the lead for the West.

The world wants the US to back off some from our World Police mentality. North Korea and Iran would be perfect places to do so in my opinion. Back off. Let the other Nations deal with them.

But if attacked by either. Our reaction should be swift and hard. Deadly. Destructive. Decisive. The Full Force of American Might and Resolve.

I know McCain can be those things. Will Obama waver? Is Obama but a Carter redux? A fearful and irresolute foreign policy President who will blink when faced with a crisis. We may face that question in the years to come. Will a President Obama pass the test?

In other words, talk isn’t cheap at all. And a President Obama’s stunningly specious foreign policy will be paid for in blood, sweat, and tears.