Hillary Clinton enabled her husband, Bill Clinton, to prey upon women for decades. Most recently, she stated the following:

“My husband’s relationship with Monica Lewinsky was not an abuse of power.”

The many followers of Hillary Clinton will defend this statement even as they have spent that past twenty or thirty years prosecuting men in power for doing exactly what Bill Clinton did. Bill targeted a young woman and used his power and influence to get her to have sexual relations with her. Yes, a blow job is sex.

Yet, these same feminists rail against and have an issue with Trump who paid women for their services. He pai

Bill Clinton is alleged to have raped, sexually assaulted and sexually harassed up to FOURTEEN women. Bill Clinton used the trappings of his office to coerce Lewinski into having sex with him. Why else would she save the dress?

Trump said; “If you are rich or famous, women will let you do anything.” Bill said; “I did not have sexual relations with that woman.”

Trum gave an example of the kinds of things that women will LET you do if you are rich or famous: “grab ’em by the pussy”. Bill gave us an example of extreme semantics in “defense” of his sexual relationship with Monica Lewinski.

Note the acknowledgement of consent in Trump’s example. Note the evasion in Bill’s.

There is no victim there.

Women who seek rich and famous men to use that wealth and fame to their advantage are not victims. They are predators.

Bill coaxed a young impressionable woman into the most intimidating office in the world and got a blow job. The Oval Office was designed to intimidate foreign dignitaries, Indian Chiefs and Warlords and World Leaders. I’m sure Monica felt right at home in that room and completely comfortable saying “No” to “the most powerful man in the world.”

The women Trump mentioned are women who allow and, in most cases, encourage these acts on the part of men in exchange for money, access, power, influence, etc.  Trump did not say that he walked around grabbing women by the pussy regardless of the desires of those women. Trump said that women will LET men do these things. It’s a huge distinction that, of course, faux feminists and Social Marxists refuse to recognize or acknowledge.

Bill bullied and intimidated Lewisnki. He’s a predator. Hillary is his enabler. I can actually see Hillary in the Oval Office while the thing was going down. “Oh yeah;” says Hillary; “Bil likes it like that.”

What’s more! Trump is correct. There are MANY Millions of Women out there who will LET men do what they want including but not limited to grabbing their pussies simply because a man is rich or famous. If you can’t acknowledge this, you are lying to yourself. You are a liar. You are probably one of the women who act in this manner and are, therefore, in denial.

Yet, there are others who were victims of Hillary and her minions:

Even CNN admits that a whole lot more women have been abused than most people realize.

“There are about 14 women who could be said to have made claims at one time or another (about Bill Clinton,” CNN contributor Errol Louis accidentally revealed on air this Thursday morning. 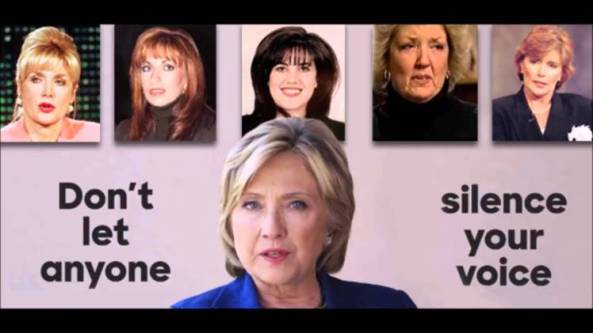