This wasn’t a witch hunt. It was/is a distraction by the Dems. They have a single goal. Delay until the election. Attempt to grow their numbers in Congress. If successful, stop appointment of any non-Abortion SCOTUS Justice.

The Democrats do not care about Ford or Ramirez or any other looney puppet that they’ve paraded across the American Kabuki theatre in Congress.

They care about power.

Ford is a tool.

Trump could have nominated Bill Clinton and the Democrats would have turned on him and put his sorry ass through the ringer.

This is about power and maintaining a woman’s “right” to kill her offspring.

I find it hilarious that the Left claim to desire Gun Control to “save the  children” whilst simultaneously advocating for the killing of children via abortion. This is a prime example of cognitive dissonance. It’s worse than Christians who claim to love all of mankind whilst calling homosexuals abominations.

Pro-Choice Abortion Activists are hypocrites. They advocate the choice for women only. If they were truly pro-choice, that decision would be extended to the man as well.

If the Male is forced to fund the birth and life of a baby which a female chooses to bring into this world despite said male’s wish that she not do so, the female should be forced to obtain the male’s approval to kill the baby.

If it is a female’s choice to have the baby, the male should have the same choice. A male should be able to say; “No, I don’t want that baby. If you decide to bring this baby into the world, I want nothing to do with it. You raise it as your own and leave me out of it.”

There is no difference.

Pro-Choice is Pro-Choice. Anything less is simply hypocrisy. You are not Pro-Choice. 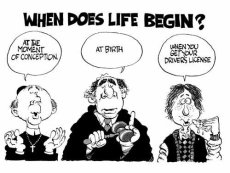 Abortion is about Life.

Life is a universal cause.

Life is not a decision that only women make.

Abortion is a disgusting tool. It is a reality, though.

I would rather that it be available than for women to be forced to use back alleys and unsafe methods or services.

However, I would rather abortion did not exist. Perhaps, we will find abortion relegated to the past someday. One can hope. For now, though, it is what we have available to us.

No human who wishes to defend life should be looked down upon. This is so even in the case of those who abhor abortion.

I, personally, would not wish to be involved in an abortion. Having said that, I realize that I have not always been the most steadfast practitioner of safe sex. I will not force another human to abide by my personal moral code. It is up to them and their conscience. Abortion should not be seen as a convenience, though.

I understand, as well, that much lip service is given to the sanctity of life and not much actual practice goes into making it a reality. Life is cheap. Life matters to few people.

It is easier to turn a blind eye to war, famine, poverty, desolation than to make these things relics of the past. These are all instances of how cheaply humans hold life. Abortion is but another.

Incidentally, there’s a balanced position that all of America’s presidential candidates could take on the controversial abortion issue. If they want votes they shouldn’t campaign to make abortion illegal or legal. They should campaign to make it retroactive. If a kid reaches 25 and he or she is still jobless, feckless, and sitting around Starbucks acting like a — no offense — European, then whack.

Abortion is controversial to any human who has a conscience….or it should be. I know women who have had abortions. I don’t know one who has not been negatively affected by it. Everyone of them regrets it on some level.

Regardless of how it’s rationalized, abortion is ending the life of a human being. We can make it sound dispassionate and we can detach ourselves with high minded legal discourse. Women can talk about “their bodies” all they want. There is always a terrible price for abortion.

And even with a clear understanding of those issues, I do not feel qualified to tell other people that they can not or should not have an abortion.

Here is the other half of the abortion issue.

A woman gets pregnant. She has three choices:

a. Give Birth
b. Abortion
c. Adoption.

A man should be able to decide from the outset whether he wants to be a father or not. Just as the woman makes this decision.  However, this is not what happens. If the woman wants to murder the baby, the man has no choice. Zero recourse. If the woman wants to keep the baby, the man has no choice and must pay for this child for the next 18 to 23 years.  The man is basically held for ransom for 18 to 23 years of his life. He is at the mercy of the woman. He is expected to support this baby and, often times, the woman/mother.

I thought that we were all about equal rights in America. There is no equality in this relationship.

Even though it is the equivalent of legal murder.

Anything less is discriminatory.  Anything else is immoral.

Michelle Obama, the attorney wife of pro-abortion Democratic presidential candidate Barack Obama, is coming under fire for a letter she wrote defending partial-birth abortions. The 2004 letter, written to help Obama in his campaign for his U.S. Senate seat, opposes the ban on the abortion procedure.

In February 2004, Michelle Obama penned a fundraising letter to help her husband Barack raise funds for his Illinois-based Senate seat.

The letter contends the federal ban on partial-birth abortions “is clearly unconstitutional” and “a flawed law.”

Though the three-day-long partial-birth abortion procedure involves the partial birth of a baby during the middle trimester of pregnancy and the jamming of scissors into the back of her head to kill her, Obama’s wife describes it as “legitimate” medicine.

“The fact remains, with no provision to protect the heath of the mother, this ban on a legitimate medical procedure is clearly unconstitutional and must be overturned,” Michelle Obama writes in the letter.

She also said the Bush administration should not encourage the abortion practitioners who sued to reverse the ban to drop their lawsuit to make it unconstitutional. The Supreme Court later sided with Bush and Congress in saying the ban is legitimate.

In closing, Obama told prospective donors that they could “count on” Barack to “keep the Bush team from appointing the Supreme Court justice that will vote against Roe v. Wade.”

Noted pro-life advocate Jill Stanek highlighted the letter on her blog and said Michelle was “leeching off the partial birth abortion ban” to raise funds for her husband.

“I’d like to ask Michelle to explain her legal opinion about this law the Supremes went on to declare constitutional,” Stanek said.

“I’d like to ask Michelle how in the world she could in good conscience raise money from fear-mongering about this barbaric abortion procedure,” she added.

Stanek pointed out that Barack Obama recently issued a warning to “lay off my wife” after she came under fire about an unrelated issue.

Stanek said the request amounted to “Free speech for me but not for thee” — something she called “a typical left-wing position.”

“So it’s fine to kill late-term babies, but we can’t risk hurting Michelle’s feelings about it,” she added.

Michelle Obama. Not content with merely hating on white folks [WHITEY!]. She thinks that jamming a pair of scissors into the back of the head of a baby inside the womb of the mother is a constitutional right. So babies are the enemy of Michelle Obama as well. I wonder what perceived slight the babies of the world committed. Michelle and her Liberal Marxist Cronies and Universal Victim-hood. Liberal Victim Theology. “Libvictomology.” A new leftest religion.

What is wrong with these people?

Michelle and Barack advocate murdering babies in order to raise money for an election. I find this disgusting.