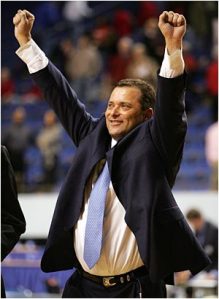 Personally, I don’t get it. Perhaps there are ulterior motives. Maybe we just have a few self righteous hypocrits who miss inept Tubby recruiting.

Smith couldn’t recruit well enough. Billy Gillispie is recruiting too much, too fast, too soon. Huh!?!

Everyone complained that UK under Smith was not getting the recruits. UK wasn’t on the radar of the Elite Recruits. Smith seemed to wait each year to the end to start his recruiting. Either he cherry picked de-commits from other schools or he was recruiting left overs in the Spring. The guys never seemed to get caught up on recruiting. I don’t know if he even tried.

His best class in his tenure was a group of guys who seemed to choose UK in spite of Smith. Rondo wanted to go to UL but Pitino chose to go after Telfair instead. Morris chose UK because it was easier than Georgia Tech. Crawford chose UK then tried to leave. Ramel Bradley was the third Guard in a class that needed a Forward. That year saw Corey Brewer go to UF because according to Smith “Brewer wasn’t big enough to play in the SEC.”  Chris Lofton chose UT that year because no one in the State of Kentucky believed that Chris could make it at the D1 level. Not the finest moment in talent evaluation for either Smith or Pitino.

“Spring” forward to the present.

Billy Gillispie has UK in the mouth of top recruits all over the Nation. He’s got talented kids committing .
Patterson committed to Gillispie. Not to Smith. Darius Smith was close to committing to Illinois. Another Kentucky kid going out of State because of the ineptness of Smith and his merry band of incompetents. Gillispie and his merry band of magicians reeled Darius back in and received the commit. Liggins, if he qualifies is a serious talent. He’s brought in two highly regarded JUCOs who I’m betting are going to help in ways that no JUCO ever helped a Smith team.  Smith trolled the JUCO ranks and struck out each time.

Dominique Ferguson is the #8 overall Prospect from the Class of 2010. K.C. Ross Miller is a Top 25 talent. Euton is a highly regarded talent.

Vinny Zollo and Michael Avery are two talented kids who have committed to the program early. Some say too early.

This is one year of recruiting under Gillispie.

I’m sure the lack of a surprise element each Spring is going to hurt some of the recruiting blogs. So I can see their concern. Slower site. Fewer hits. That’s gonna hurt the bottom line. But I think it will eventually even out. People are going to want to follow these kids. See how their panning out. Follow their development.

Not all early recruits are going to level off talent wise or regress as in the cases of J.P. Blevins and Adam Williams. Both Avery and Zollo are taller and more talented than those two were in their Senior years of High School. I’m thinking that Zollo and Avery both could come in right now and start over either of those guys.

The recruiting landscape is changing. It’s been changing. Williams, K, Self and others have been adapting to this change all along. Smith was behind the power curve. Gillispie is bringing UK back up to speed. He’s making UK a major threat on the recruiting trail once more.

I say it’s about damn time. Before fans of any other programs start throwing stones, you might want to look at the walls of your house. Lots of glass out there.

I don’t care so much about recruiting. As long as Gillispie keeps it legal, I’m for letting him do his job. I’d rather know who is coming. I’d rather coach have the time to develop a plan of action on how to incorporate those players into his system. Recruiting is a tool to get there. It’s a means to an end, not the end itself. That is unless you are a blog or website dedicated to recruiting. Gillispie is recruiting to win Championships. It’s a take no prisoners endeavor.

Winning Championships is what should fuel BG. Bring on Number 8.