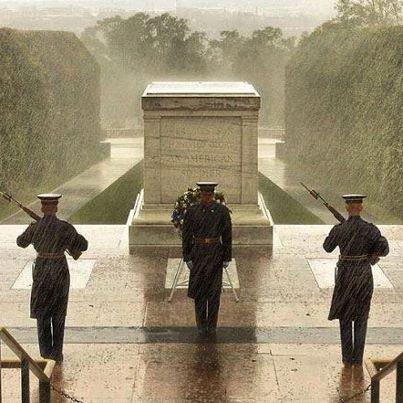 This photo is old. It was not taken during Hurricane Sandy. Despite the propaganda.

These guys (the Tomb Guards) are out there for 15 to 30 minutes at a time during inclement weather. Their warm and cushy barracks/office stands a mere 20 feet from their duty station. Please excuse me if I’m not all that impressed by their “sacrifice” but I served in The Old Guard for 3 years with these prima donnas.   Personally, I find the whole thing hilarious.  Certainly, it is difficult to become a tomb guard.  As part of the process, a prospective tomb guard must memorize the whole of  Arlington National Cemetery.  They must also be able to locate within a moments notice and within 15 minutes of being asked any tomb, placard or grave marker within Arlington National Cemetery.  Lots of useless information since they are NOT ANC tour guides.

Again, please excuse me, if I’m not impressed with their standing out in the rain or snow for 20 or 30 minutes.

Especially after I spent two to three weeks at a time in a tent, fox hole or on guard duty in the Siberian winter like cold of the Koreas where there is no absolutely no break from the cold and your tent freezes over night, your boots are frozen so stiff that you can’t get your feet into them and your socks that you left out to dry over night are standing at a rigid, imitation of the position of attention and you have to spend 15 minutes holding them over the fire to thaw them out enough to put back on your cold, near frost bitten feet.

The Old Guard is a cush assignment.  It’s one of the easiest assignments in the Army.  Sure, it’s a pain in the butt getting ready for ceremonies constantly.  Burial duty is sad and an equal pain in the ass.  But it was an honor to be able to participate in placing a veteran or soldier honorably in his final resting place.  Regardless of how difficult the Army made the act for it’s living soldiers.

I’m impressed by the arduous and danger filled lives led by combat soldiers.  That impresses me.  Show me photos of men and women sharing the danger of actual combat and I’ll be impressed.

Show me a guy sleeping in the mud on a FOB because they’re waiting to go on convoy, HELL…I did that as a civilian in Afghanistan.  A guy sitting on a FOB safe and sound.  Not impressed.  A guy standing for 15 or 20 minutes in the rain or snow wearing nice, warm clothing and standing a mere 20 feet from warmth and comfort.  Not impressed.

I don’t care how pretty they are or how many gravestones they can locate in Arlington National Cemetery.

I completely understand why retired Vets who never served in The Old Guard and civilians fall under the spell of ANC and the Tomb Guard.  That’s the whole purpose of the operation.

I’ve been there.  Seen it.  Stood in the Tomb Office and chatted with the guards before they walked out to their post and conducted the changing of the guard.  I’ve drank with guys who were Tomb Guards out on the town in Northern Virginia, Georgetown and DC.

They’re good guys most of them.  They go through hell to get that damnable badge and once they get the badge, they are held to a life long standard against which award of that badge might be rescinded for failure to uphold said standard.

I love the Tomb Soldiers and the idea of eternal vigilance.  What irks hell and holy water out of me is when these guys are used as political pawn by right wing freaks attempting to guilt me into feeling some kind of duty to their ideological dogma.  Guarding the Tomb is an honor.  Let’s leave it at that.

I’ve seen the changing of the guard at the Tomb of the Unknowns at least a couple of dozen times.  There is a certain majesty to it.  There is greatness in a Nation honoring it’s fallen thusly.

I’ve laid flags in Arlington National Cemetery 3 years in a row for Memorial Day.  It was an honor to complete this mission in honor of our veterans and fallen soldiers.  There is a tingling in my spine even now, years later as I write about it.  Yet, let us leave the politics out of it.  Let it be an honor to our soldiers.  Let it not be an attack along partisan political lines.

When it comes to silly, partisan political propaganda like this, there is an old saying oft repeated by a First Sergeant of mine in the late ’80s; “Don’t piss down my back and tell me it’s raining.”