This only exists in the West.

These proud, Gay Muslims would be closeted and fearing for their lives in nearly every Muslim Nation on the Planet.

They would be in hiding in Iran.

They would be running for their lives in Afghanistan.

In Iraq and Syria, they’d need to dodge missile, mortars and Muslims. ISIS would torture and behead them.

In Lebanon, Hezbollah would murder them.

The Palestinians would rise up against them and stone them, hang them or force them to wield a knife against armed IDF soldiers.

These people cannot be serious.  This guy is an exceptionally idiotic example of a “proud, Gay Muslim.”. If you are such proud, Gay Muslim Warriors, go to Pakistan and announce this as you do in the West whilst pretending that you are oppressed in America, Britain and Europe. You can use the experience to get a real feel for oppression.

Proud, Gay and Muslim? You may as well say that you are proud, Muslim and Fuck Allah as you piss on the Ka’aba in Makkah.

The ignorance of the religious and the weakness of the mind of people who need religion never fails to astound me. 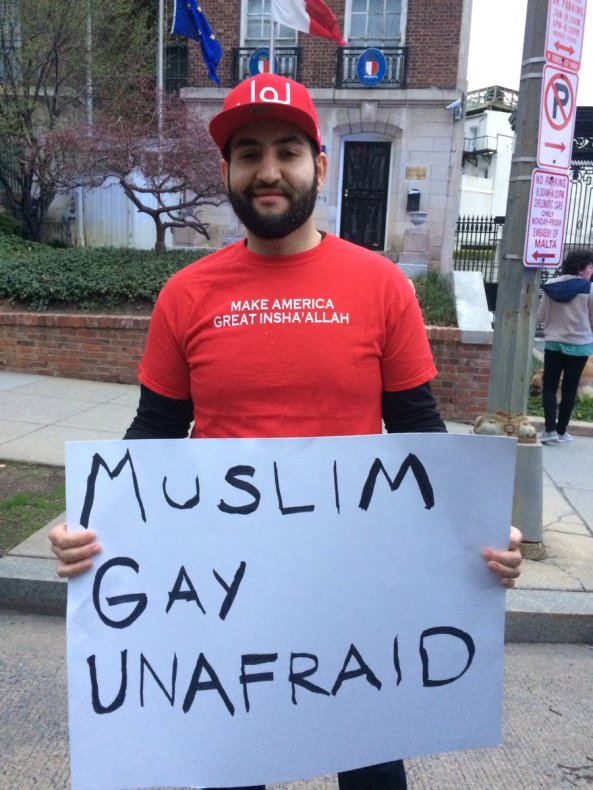 The “brave” Gay Muslim (in the photo above) can be unafraid because he lives in America. If he lived in the Middle East or Central Asia and stood about with that sign, he’d be dead.

Why are they telling Americans that they are unafraid? Let them travel to Syria, Iraq, Somalia, Iran or Pakistan and carry that sign around. These morons are fighting against nothing. They are protesting nothing. No one in America cares that they are Gay. Most people don’t care that they are Muslim. If he were truly unafraid, this coward would travel to Saudi Arabia and fight for his fellow LGBTQ’rs therein and to other countries where homosexuals are put to death via Sharia.

It’s easy to hold up this sign in a country which has free speech and where the right to assemble and petition the government is enshrined in its founding document.

Let us see these brave souls travel into danger and be unafraid in the face of certain death.