US Department of Education established in 1979 by Jimmy Carter.

The US now spends more money per student than any other Nation in the world. For all of that, the US now ranks somewhere between 17th to 35th in Global Education Rankings on scholastic achievement.

Among adults age 25 to 34, the U.S. is ninth among industrialized nations in the share of its population that has at least a high school degree. In the same age group, the United States ranks seventh, with Belgium, in the share of people who hold a college degree.

By both measures, the United States was first in the world as recently as 20 years ago, said Barry McGaw, director of education for the Paris-based Organization for Cooperation and Development. The 30-nation organization develops the yearly rankings as a way for countries to evaluate their education systems and determine whether to change their policies.

The Democratic Party was paid off by Teacher’s Unions to create the Department of Education. The US has been on a free fall in education since.

The current education system is akin to grabbing a million squares, triangles, circles and ovals and smashing them into star shaped slots.

The American Education Department destroys more than it creates.

“We live in a globally competitive knowledge based economy, and our children today are at a competitive disadvantage with children from other countries,” Duncan said. “That is absolutely unfair to our children and that puts our country’s long term economic prosperity absolutely at risk.”

The Left is going crazy over Betsy DeVos. I can’t see how she can do any worse with the Department of Education than anyone since President Carter established the failed institution. 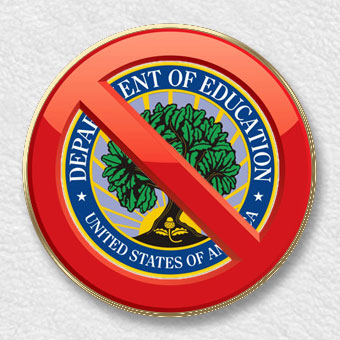