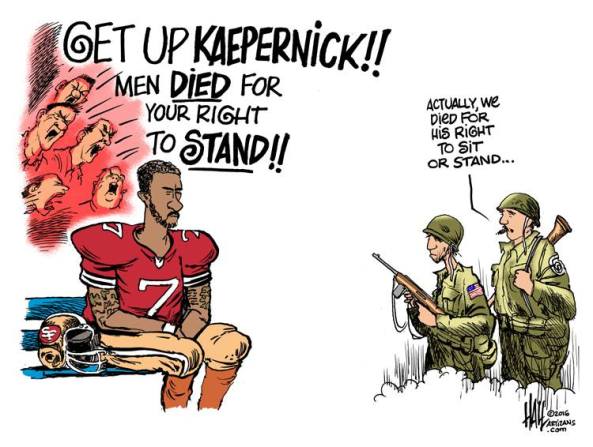 Working for a Civilian Organization and the United States Army are two entirely different things. In the military, one must surrender certain benefits of citizenship. As a civilian, one has no obligation to do so. It is difficult for many long term Military persons to grasp this.

A Citizen of a Free Nation is not obligated to bow to symbols or to public pressure. The NFL has no problem with their expression in form or substance and have made it clear that they feel obligated to allow these Free Citizens to exercise their Natural Rights.

I see not why I should be outraged by the act when I served to protect their right to express themselves and to enjoy Liberty. Again, this is me. This is how I feel. I am proud to live in a Nation where individuals can be free to be moved by conscience.

It matters not to me if they are Billionaires or Homeless Persons on the street without two nickels to rub together. They are Americans. They have the right to Petition the Government for Redress of Grievances, to Assemble, to Free Speech, to Bear Arms.