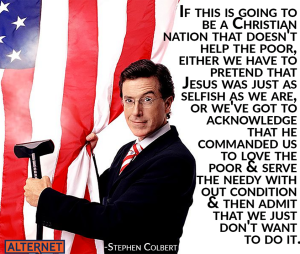 I have no problem with helping the poor and the needy.

I’ve given folks spare change. I’ve bought clothing for children in Afghanistan, Cambodia, Thailand and Egypt. Among other places.

I’ve helped rebuild schools, supply schools and have given classes in non-industrial and pre-industial nations.

I’ve worked for charities such as Meals on Wheels in America.

I’ve given tons of stuff to Good Will and the Salvation Army.

I’ve sent money to causes all around the world and in America.

I’ve done all of this and I quite thoroughly enjoy helping others who are poverty stricken or in some way in need of assistance.

No, I do not think that the United States Government is a good agency for my money or the honest disbursal of said monies to those who are poverty stricken and in need of assistance.

Oh yeah…I’m not Christian. So I don’t really care what kind of person the myth of Christ makes him out to be.