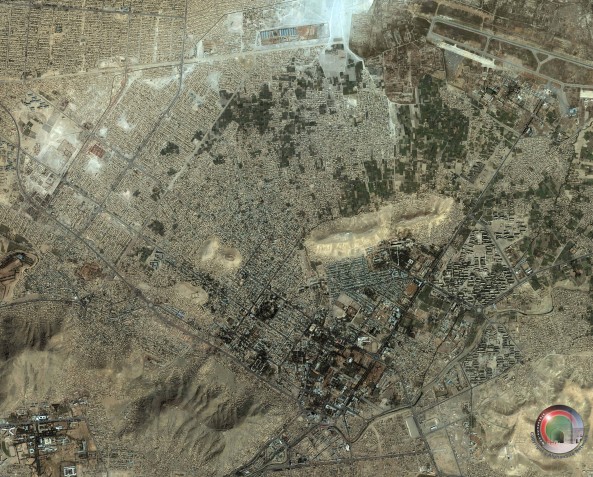 2 years and three days from the date of this photo, the life of this city would be altered forever. The Twin Towers in New York would fall and the US Army would invade Afghanistan. Bombing Kabul and deposing the taliban and their medieval reign. The city and it’s people will recover and nothing will ever be the same. Some will be thankful. Others will fight.

Having driven around Kabul a fair amount, I know the city fairly well. It’s odd to look at this map and see how it used to be. Major landmarks of today are missing from the view. The American Embassy Compound. Massoud Circle Monument. Of course, Massoud was still alive in 1999. It would be two years later that the cowardly al Qaeda assassins murder Massoud with a bomb hidden in a video camera. Not until 2002 or 2003 that the American Embassy compound begins construction. The old airport facilities have begun to be torn down and today there is a new facility built by the coalition and run by a British company.

The safe houses in which we stay when I move through Kabul are not there nor are the Indian and Iranian Embassies. Camp Eggers is still a group of houses. I’m guessing they are vacated as when the US first inhabited that compound there were years old animal carcasses found laying about.

Kabul has changed quite a bit since this picture was taken.

In 1999, the taliban were running around beating men for not having 3 inches of beard. They were shooting women for adultery. The men, of course, were given 20 lashes or so for having been bewitched by those women. Women were not allowed to walk the streets of Kabul without a relative male escort. All manner of medieval lunacy ruled the streets of Kabul under the reign of terror imposed by the Taliban and their Pakistan and al Qaeda sponsors.

Today, though Kabul still convulses in violence on the odd occasion, it is a city much like any other in Central Asia. No Westerner coming for the first time would think it civilized. Comparatively speaking, though, Kabul is normalized. The bazaars are open. Shop keepers go about their daily business. The citizens of Kabul are free to come and go as they please. Women can be seen walking the streets alone and in pairs. No male escort required. Unless, of course, they are family of one of the backward thinking members of the Muslim community. Kids walk the streets. Students going to and from Kabul University and a plethora of schools from primary to High School. There are snooker halls and gyms open all over the city. Restaurants are everywhere. Poorly maintained cell towers. Even shopping malls have sprung up here and there.

Taken as a whole, Kabul is not a bad city. The corruption of the Karzai government is ubiquitous. Seen everywhere. From the police who patrol the streets and man the central stations to the government officials who earn 10 to 20 thousand dollars a year, yet, own million dollar homes dotted across the city land scape and surrounding neighborhoods.

It’s interesting to see this bit of history. An apparition from the near past. So much has changed. So much altered. Both progress and regression.

I wonder what it will look like in another decade. Will chaos rule again or will the Afghan people move ahead and persevere despite the leaders that look to profit from the violence and chaos?