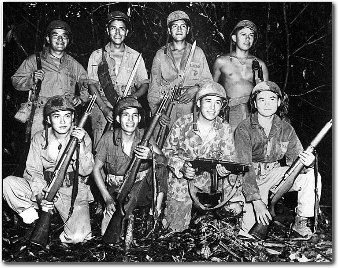 Why do we name our battles and weapons after people we have vanquished? For the same reason the Washington team is the Redskins and my hometown Red Sox go to Cleveland to play the Indians and to Atlanta to play the Braves: because the myth of the worthy native adversary is more palatable than the reality — the conquered tribes of this land were not rivals but victims, cheated and impossibly outgunned. . . .  It is worse than denial; it is propaganda. . . .  In whatever measure it is tribute to the dead, it is in greater measure a boost to our national sense of superiority.

A moron named Simon Waxman wrote this incredibly ignorant piece (some say Onion Worthy) for the Boston Review.  It shows a complete lack of context and historical knowledge.  It’s also insulting to the many Native Americans who have been a part of the American Military Tradition since before the founding of the United States of America.

My first reaction to this article was to ask; “What loser wrote this nonsense?”

My second thought was to wonder if the Navajo would feel the same way as this White Boy.  White Boy?  Well, yes, Simon Waxman is a White Boy.  Another in a long line of Great White Fathers who feels entitled to tell the natives of the North American continent how they should feel and act and respond to all things connected to the Great European Invasion.

The natives of this land were conquerors.  I hesitate to call them aboriginal peoples as no one knows to whom exactly that title would apply.  The peoples who inhabited the Americas at the time of the Euro invasions did not simply appear out of the ether and the mysts eons ago only to be invaded by evil Whitey from Europe.  No, they traveled far distances, thousands of miles to arrive here as well.  There are traces of other civilizations spread throughout North America.  From ancient Chinese writings cave walls out West to Welsh speaking tribes in the East.  There are also ruins found along the Missouri and Mississippi rivers which oddly resemble Roman military fortifications.  There is evidence that African peoples traveled to the Americas and settled.  There is also speculation and some evidence that the Phoenicians traveled to the Americas and left settlements thousands of years ago.

The Apaches were simply one of the latest warriors tribe known to the Americas and extant when the young American Empire decided to expand or to “Go West, young man!”   The Apaches happened to be one of the more vicious of the Western tribes.  They displaced peoples only to later be displaced by Europeans.  These warriors conquered others. The Commanche was another such tribe as were the Sioux.  There were no native tribes in the Americas who had not at one time or another been ascendant and in that process of ascendancy who did not displace, conquer and kill.

Black Hawk was a military leader. He led a band of Indians against the early American settlers of the West. He also displaced other Indians. He and his forebears conquered. His tribe did not materialize out of the ether and mysts on their lands in the beginnings of time when the world was young and violence was yet to be invented either.

Do Liberals not understand, comprehend or have any knowledge of history.  I am inclined to believe that they must not actually develop a real knowledge base. They read only articles and books about victimization.  They subsist on a steady diet of “victimology.”  I pray that there comes not a day when Liberals believe me to be imperiled.  I would not wish their pernicious evil to be thrust upon the memories of my peoples — the individualists, the iconoclasts, the folks who simply do not want to be bothered by Liberal guilt (or their brothers the conservative right).

There is not a group of peoples who have not conquered others. Not one.  This does not exist.  These innocents do not exist.

I know of no group of pacifist people who have lived completely at peace with those around them since the beginning of time.  Pacifists themselves cannot exist as a sole group.  They would be conquered immediately.  Pacifism is a parasitic philosophy as it can only exist within a group that has members who are willing to actually fight.

Simon Waxman, I think, has never sat down and conversed with a “Native American.”  He is another in a long line of “Great White Fathers” who wishes to speak for the poor red man of the Americas.  These White boys irk the hell out of me.