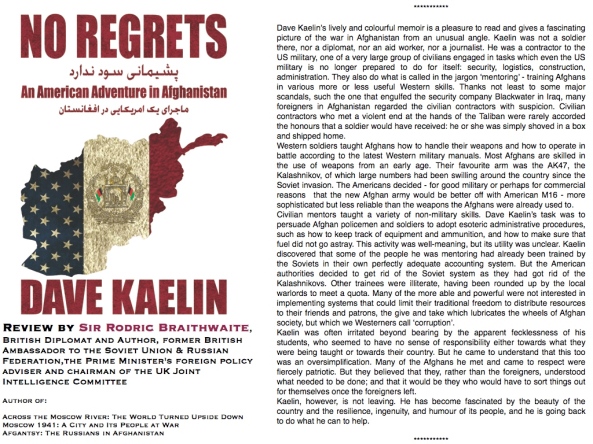 A month ago, I sent a copy of my book to Sir Rodric Braithwaite. Sir Rodric is a British Diplomat and Author. I had read his book Afghantsy about the Soviet Invasion of Afghanistan. About half way through, I noticed that much of the Soviet experienced mirrored our ( US) own.

I decided to send Sir Rodric a copy of my book and ask his opinion on my assumptions and observations. Sir Rodric received the book and immediately emailed me. We had been corresponding via email and I asked if he could write up short review of the book that I could post and send out to attempt to garner interest in the book.

Though he was busy with the Crimean Crisis, Sir Rodric was gracious enough to grant my request. The attached is the result.

Across the Moscow River: The World Turned Upside Down
Moscow 1941: A City and Its People at War
Afgantsy: The Russians in Afghanistan