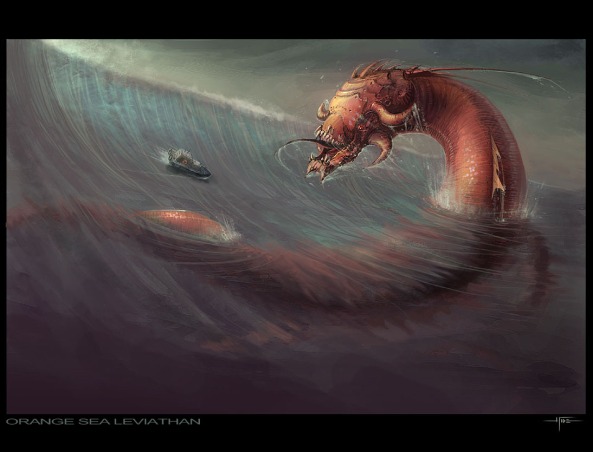 “Can you draw out Leviathan with a fishhook or press down his tongue with a cord? Can you put a rope in his nose or pierce his jaw with a hook? Will he make many pleas to you? Will he speak to you soft words? Will he make a covenant with you to take him for your servant forever? Will you play with him as with a bird, or will you put him on a leash for your girls? …

There go the ships, and Leviathan, which you formed to play in it.

You crushed the heads of Leviathan; you gave him as food for the creatures of the wilderness.

“Can you draw out Leviathan with a fishhook or press down his tongue with a cord?

Let those curse it who curse the day, who are ready to rouse up Leviathan.

Smoke went up from his nostrils, and devouring fire from his mouth; glowing coals flamed forth from him.

His sneezings flash forth light, and his eyes are like the eyelids of the dawn.

And he seized the dragon, that ancient serpent, who is the devil and Satan, and bound him for a thousand years,

You divided the sea by your might; you broke the heads of the sea monsters on the waters.

And I saw a beast rising out of the sea, with ten horns and seven heads, with ten diadems on its horns and blasphemous names on its heads.