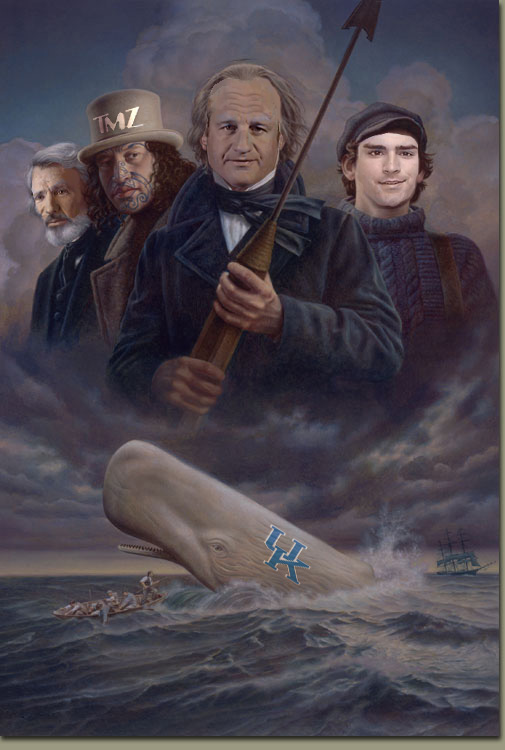 Every summer, there’s a scandal and investigations and media created brouhaha.

Pete Thamel and the rest come out of their caves to stalk some 17 or 18 year old kid and his entourage.  I wonder how it feels to have your life revolve around the lives of 15 to 18 year old kids.  Pete Thamel knows all about it.  The guy has a disease.  I wonder if he surfs the Russian internets to find kiddie porn.  He’s obviously obsessed with children and their naughty little secrets.  Maybe Thamel envisions himself in a Nun Habit spanking 6′ 8″ Black kids on the rear for being naughty.  I’m sure his ultimate fantasy is spanking that same Black kid while he’s wearing a Kentucky Basketball Jersey.

These folks have a sickness.  They speak of College Basketball as if it’s some sacred institution.

What’s the difference between John Wooden and Tark the Shark?

Wooden’s Boosters weren’t caught until AFTER Saint John retired and was already Canonized by the NCAA and the Sports Media.  Once the Media Canonizes you, they will not admit the mistake.  They might seem imperfect.  And we all know that the Sports Media are so perfect and blameless as to make Jesus Christ seem the Mass Murderer.

Had Sam Gilbert been caught while Wooden was winning his multiple Championships, the media would have crucified Saint John.  Coach Wooden was already long retired and long the Holiest Man in College Basketball when the truth of Sam Gilbert came out.

A straight THUG purchases abortions, shoes, cars, clothing and gives “pocket money” to a decades worth of athletes at UCLA while Wooden is winning successive Championships.  This is the same era that ended with Kentucky getting a near death penalty.  Kentucky was hammered for much less than the rulebreaking that went on for a couple of decades under the “watchfully” blinkered eyes of Saint John the Wizard.  I reckon his magic only worked on the ball court.  He certainly wasn’t omnipotent off the court or he’d have known what was going on with his players and Sam Gilbert.

One could take the “crimes” of Tark, Calipari, Pearl, Harrick, Sampson and Sutton and still not have a sum total near that of the crookedness of the College Basketball Program of John Wooden.

That Wooden Era is supposedly the Golden Era of College Basketball.  The days to which all of these sports morons like Pete Thamel and Pat Forde wish to return.

I have a question for Pete Thamel, though.  Who is covering the programs over at Syracuse.  Isn’t that your area?  While kids are getting molested by an old man in the Syracuse Basketball program, Pete Thamel is investigating kids at Kentucky and Georgetown.  All the while turning a blind eye to Syracuse Boosters and their child molesting assistant coaches.

I bet there has never been a scandal at Syracuse, so, good ol’ Petey got bored and decided that his career of riches would start with John Calipari.

I’ve noted time and again on this blog the hypocrisy of the NCAA and the Sports Media.  Their treatment of Bill Self, John Wooden, Roy Williams.  These guys cheat and the media turns a blind eye.  They may write a story about it.  However, it doesn’t become a scandal.  One of their chosen could rape a 5 year old and the Sports Media would bury it.  They’d choose instead to write an unsubstantiated story about a Kentucky recruit for whom a homeless man bought lunch while said recruit was 5 years old.

That’s your Sports Media.  What’s worse is that so much of the following in Sports buys into the utterly contemptible garbage spewed forth by these morons.  Makes me wanna curse…and then laugh.  Gullibility in the sports world is almost as ubiquitous as unprofessional journalism while “Sports Journalism” has become as oxymoronic as Military Intelligence.