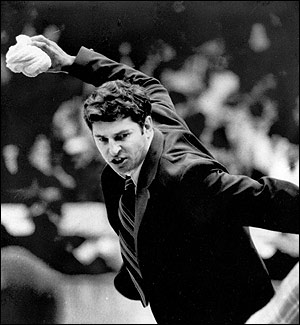 BOBBY KNIGHT THROWING ONE OF HIS INFAMOUS TEMPER TANTRUMS. ALL CLASS BOBBY! ALL CLASS!

In spite of the great academic successes he had at Indiana (and nearly all of his players graduated, far above the national average) the press preferred to highlight the dramatic—and occasionally violent—interactions between Knight on one hand and everyone else on the other. In 1979 at the Pan American Games, Knight, in a confrontation with a Puerto Rican police officer, punched the cop after Knight was ejected from a game on a technical foul. The Puerto Rican government then put out a warrant for Knight’s arrest, but he could not be extradited from the U.S. In the late 1980s Puerto Rico recalled the warrant. Knight, quoted in Sports Illustrated at the time, said of the Puerto Ricans, “F—’em, f—’em all.… The only thing they know how to do is grow bananas.”

This guy should be run off the court.  He’s completely unprofessional.  How do you talk about Player of the Year Candidates in the year 2012 and NOT mention Anthony Davis?

How does anyone take this clown seriously?

I swear BOBBY KNIGHT looks like an old drunk on TV.  Red Face.  Bulbous Nose.  He’s got a constant case of the DTs.  The guy is full of old hates and haunted by the past.  Nothing in the past haunts him more than Kentucky Basketball.  I suppose that’s why he’s always looks three sheets to the wind.  Hate does that to ya.  Eats away at the soul.  Breaks a man down as surely as a 10 year drunk.

The guy is entirely without honor.  He throws fits when he loses.  He curses at kids when he’s not choking them.  He kicks chairs across the court.  He’s supposed to be on ESPN as a Sports Announcer.  Yet, he holds grudges against Kentucky and will not do games involving the Big Blue.  He won’t even say the name.

The man spouts erroneous information as if it’s fact such as his statement that Wall, Cousins, et al did not finish their course work and/or failed all of their classes.  Knight will be like Wooden.  It will come out after his death that his players were paid and that cheating went on at the pristine Indiana University.  Everyone will then know that Sampson was not the only cheater at Chair Throwing/Student Choking U.   No one is as clean as this guy pretends to be…no one.  Especially no one who preaches as much as this guy.  He’ll turn out to be to College Basketball what Jimmy Swaggert was to Evangelical Christian TV.  A BIG FAT FRAUD!

How the hell can you take the man seriously when it’s obvious that he’s more biased than  Adolph Hitler and half as charming.  ESPN should dump this red faced dud now.

If you talk about National Player of the Year Candidates in the Year 2012 and you don’t mention Anthony Davis then you are either Senile, Drunk or an imbecile.  Perhaps, Bobby Knight has hit the Trifecta again.

Indeed, Knight’s list of notable mishaps seemed to get longer and longer, and as his team seemed to make earlier exits, the severity of actions grew in correlation with his team’s failure to win in the NCAA tournament. He stuffed a fan from an opposing team (LSU) into a trash can. He told Connie Chung during an interview, “I think that if rape is inevitable, relax and enjoy it,” though he later said that Chung took the quotation completely out of context. He has told women, in general, “There’s only two things you people are good for: having babies and frying bacon.” He pretended to bullwhip his star player, who happened to be black. He tossed a chair across the court during a game, kicked his own son (a player for him at the time) in the leg, and head-butted a player on the sidelines in a game, later claiming that he slipped as he was approaching the bench.

In 1986 Knight, in an attempt to show the country that he was not as bad as he was made out to be, allowed reporter John Feinstein total access to the Hoosier locker room and practices. This was unprecedented for Knight, who typically closed his practices to the press and the public. When John Feinstein’s tell-all book, A Season on the Brink, came out in 1987, Knight claimed Fienstein distorted the facts.

As the nineties drew to a close, Knight’s position at Indiana grew tenuous in spite of his nearly three decades of success at the school. Though many people would have weathered any turbulence with The General at the helm (and many Indiana fans still remain loyal to Bobby Knight, regardless of the fact that he coaches a thousand miles away in Texas), his questionable actions seemed to grow in intensity. In 1999 he was accused of choking Indiana basketball player Neil Ried in a 1997 practice (the act was caught on videotape). The school investigated and issued Knight a warning, suspended him for three games, and fined him $30,000.

He was also issued what the University referred to as its “zero-tolerance” policy in the spring of 2000. In the media storm that erupted in the fall of that year, it seemed that the reign of Coach Knight would come to an end. But just how it would end, no one knew.

On September 7, 2000, Knight allegedly grabbed Indiana freshman Kent Harvey and screamed profanities at him. Harvey claimed that he’d only said, “Hey, what’s up, Knight?” and then Knight proceeded to berate him for disrespecting his elders. The picture gets blurry, however, and the true story of what happened—whether Knight used force or whether he merely held Harvey by the arm as he berated him—are not known. Knight would not apologize, however.

Indiana University claimed this was the type of incident their zero-tolerance policy was meant to prevent. University officials declared Knight’s behavior unacceptable, and fired their coach on September 10, 2000. The president of Indiana University, Miles Brand, said that no one incident broke the policy; rather, Knight’s continued display of bad behavior was the cause of his dismissal.