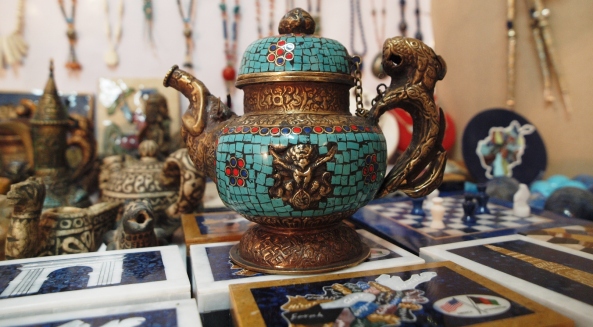 I walked over the bazaar to say a final farewell to a friend.  Hossein sells bootleg DVDs at Coalition Camps all over Herat.  I’ve run into him all over the place.  Primarily at the RTC, Camp Stone and Camp Arena.  I’ve seen him tooling around downtown Herat once or twice as well.  We struck up a friendship of sorts over the past couple of years.  So I stopped by to say farewell.

While I was doing that, I ran into the Tea Pot.  Unny wants to have a small cafe in Bangkok.  So I figured it would make a nice piece to display at such a place.  I picked it up for her.  It’s inlaid with turquoise, lapis and some kind of red stone.  I like it.  It’s a nice little piece that I think she’ll like as well.  It’s decorated with figures from Hindu and Buddhist mythology which ties in nicely with Thailand.  Garuda is front and center in the picture.

The other pics are just random shots taken as I waswalking about the bazaar area and the camp.

12 comments on “Walking around Camp Stone on a Friday morning”