Rape and Murder: The Tools of Karzai Democracy

The Karzai Government is corrupt and beholden to Thugs, Thieves and scandalous, corrupt Mullahs who want to force medieval religious “values” on the common people as they use Islam to rape the country.  These thieving scoundrels use Islam as a tool of rape, plunder and intimidation.  They use their power in the government and their association with the United States to empower themselves and to bully the people.  They use rape and murder to intimidate any voice which rises in defense of the people of Afghanistan.

The worse thing about this situation is that it is American money and influence which allows this situation.  Rumsfield, Cheney, Bush and, now, the Obama Administration are keeping these men in power.  These scum are the anti-thesis of Democracy.  They are Taliban lite and in some cases, they are worse than the Taliban.  They have become so under the protection and with the help of the US and NATO forces.

We empower these corrupt “leaders” and allow them to use Democracy as a guise under which they protract a decrepit despotism that they started after the fall of  King Zahir Khan.

America is not spreading Democracy in this region.  We are doing the very opposite.  It’s shameful.

We should be supporting the Malalai Joyas of Afghanistan.  Instead, we are supporting the evil, murdering and raping despotic Warlords who are democratic only in the sense that they mouth the word from time to time. 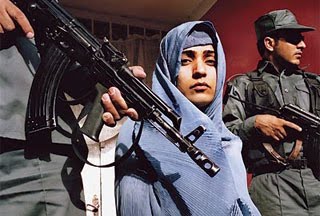