I had been planning and putting off going to Laos since 2005.  I’d even booked a flight boarded a plane and been diverted by a cyclone.  Wound up going to Chiang Mai instead on that trip. This trip.  I hadn’t intended to go into Laos.  My intent was to stay in Cambodia a bit longer and travel upriver to Battambang and see a bit of the countryside away from the usual tourist chatter. This time, though, I decided that it was time.  I’d waited long enough for Laos and Avin decided to go with me.  But first, Angkor… 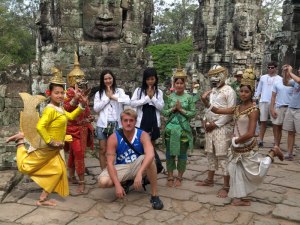 Amy, Rey and me at Bayon Temple

On my last holiday (July 2008), I had come to Siem Reap from Phnom Penh and two of my friends from the capital city had come up with me so that I could give them a tour of the Angkor temples.  A bit of a twist there.  An American giving Cambodians a tour of their own cultural treasures.  I’ve been there 6 or 7 times by now.  So I guess I know them as well as anyone.  I’ve almost seen all of the temples around Siem Reap. On these next few trips, I plan on branching out a little further and seeing some of the sites near the Thai border.  But that’s for the future.  Amy, Rey and I toured the temples.  I took them to all of the major sites.  Angkor Wat.  Bayon.  Ta Prohm.  Bakoung.  The Elephant Terrace.  The Leper King.  By that time, the unrelenting Cambodian sun had taken it’s toll.  We returned to our hotel to rest during the heat of mid-day. During the summer months of Cambodia, you have to get out of the heat at mid-day.  That sun will cook you.  I’ve stayed out in it.  But I’ve not many Cambodians who will endure it for long by choice.  I like being out at this time because there are fewer tourists out at this time.  I can be alone in the temples.  Get great pics.  Take my time.  Afterward, we went to the Temple Club.  We watched the Apsara Dance Show and had a few drinks.

The funny part of this night came after we left the Temple Club and it’s Apsara.  We walked up Pub Street to a rooftop bar at the end of the street.  Before we went up, I noticed neon lights a little further down the street.  I asked the girls if they wanted to check it out.  They agreed to come along.  When we got inside, it turned out that the bar was a Khmer version of a strip club.  No  nudity.  But dancers on a stage in skimpy outfits.  These girls were acrobatic.  I don’t think any American girls could compete with the way these girls dance.  I sat down and ordered a drink for myself.  Amy and Rey ordered a beer.  I looked around a bit uncomfortable.  Not for myself, though.  I was fine in there.  More than fine.

I need not have worried.  Amy and Rey loved the place.  They danced to the music.  They talked about the girls.  Asking me which was sexiest and prettiest.  Compared the dancing.  They applauded at the end of each dance.  We sat there and carried on and had fun.  A little later, we invited our favorite over for a drink.  I was thinking the girl would have a beer or a whiskey and coke.  She ordered a Soy Milk.  I almost fell over laughing.

It was an interesting trip.

The girls left the next day and I met Avin…

2 comments on “Angkor and Siem Reap: The American Guide”