Nothing wrong with that. This little “commercial” is from a Basketball Reel to Reel that I was able to get off of ebay a few years back. I had it converted to digits and now that I have a way to share it (this blog), I’ll be posting it on the blog over the next week. It’s a three part film on Individual Offense. It’s part of a larger effort with three other coaches and Coach Rupp explaining different aspects of the game. Of course, the game has changes a bit since these coaches were in their prime. I can’t find any information on the film on the web and the actual reels are in my storage room back in Kentucky. But I’ll post as much back ground information as I can gather.

I always find it interesting to hear Coach Rupp talking. You can tell the man has a love for Basketball and for the University of Kentucky. He smiles a lot in this film and talks to his team. From what I’ve read, he didn’t do that often in practice. So these film productions may have been a welcome respite from what I’ve read were immensely difficult practices in the Rupp Era. This film gives a quickshot of Harry Lancaster–Rupp’s longtime assistant. 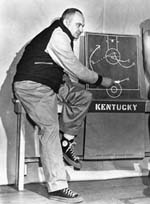