Coach Rupp was interviewed by Claude Sullivan after the 1966 National Championship loss to the Texas Western Miners. 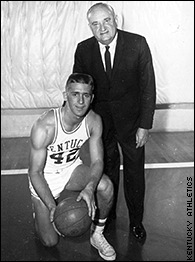 Claude Sullivan: OK, well it’s a tough one to give tonight because everybody in Kentucky and on this Standard Oil network, who was listening. I know that almost everyone of them was for these Kentucky Wildcats. And of course, it’s a heart-breaking thing because a journey that Adolph Rupp talked about earlier that began back in December, ended here on heartbreak highway tonight. For the Wildcats who now are sitting dejectedly across the floor. They came into this thing heavily favored, maybe that hurt them. The way these Washington papers played it up today as no contest, they thought Kentucky was going to walk away with it, maybe that hurt the Wildcats more than anything else.

Adolph Rupp: Seems, they made about 17 more free throws than we made, and I think that was the entire story of the game. We made, more, five more field goals than they made, that’s the fact of the case. But we didn’t play very good tonight. Texas Western made a lot of mistakes against our press, and I was sure we’d catch them. But I think it will show that the shooting average tonight did not take care of us at all. In the first half it was 33%, and I don’t believe it was much better than that in the second half.

And I’ve always told you on this program that shooting has taken care of us, but tonight it didn’t. And I don’t think we had a single boy that played up to par tonight.

Claude Sullivan: Coach Rupp I’m sure that a lot of people will be asking you, ‘How good is Texas Western’ ?

Adolph Rupp: Well, the way they handled the ball tonight, it’s a good ball club. I put them in the same class with Michigan, I put them in the same class with Tennessee, and Vanderbilt, teams like that. I think they’re a good ball club. They hit tonight, they hit very well tonight. They hit the clutch baskets when they needed it. We got them down there in the second half, I think we got them down to one point one time, two points another time, but we never could get the clutch basket. And it was our shooting that hurt us tonight. We missed shots. I wouldn’t be a bit surprised if the rebounding doesn’t show that we stayed on the boards with them pretty well, in spite of the fact that they’re much bigger than we were. But we just couldn’t shoot well.

Claude Sullivan: Coach Rupp did you feel that in the beginning of the game when after nine minutes you only had nine points, that it was bound to break for you with such a slow start.

Adolph Rupp: Yep, I told the boys at the half, I said we can’t play a miserable second half the way we played this first half. We gave them four baskets the first half that we shouldn’t have given to them. And, those two steals. I told the boys in the locker room, just before they came out at the beginning of the ball game, that they double team the boy bringing the ball up. But you can’t dribble the ball with your head down and not look around to see what’s going on, and that’s exactly what happened. Those were the two baskets, I believe, that hurt us early in the ball game. Then we gave another one by throwing the ball away, and they took it and threw it in and it got them a six point lead. And we never were able to get the momentum going after that. We started pressing a little bit then then and I think that’s the story.

Claude Sullivan: Well we’ll be back here at College Park talking with Coach Rupp in just one minute.

Claude Sullivan: Well the college basketball season is over, Coach Rupp, what are the plans now ?

Adolph Rupp: Well it’s been a long year, it’s been a good year, it’s been a better year than any of us ever dreamed it would be. Now then of course we’ve got to go out, we had a miserable recruiting year last year, one of the worst we’ve ever had. And we’ve got to go out and find us some boys, with size. This little button kid has gotten us an awful long way but, but it proves what I’ve been saying all year long, that when you get in there with those big guys who can dunk that thing, you’re going to be in trouble and that hurt us tonight, badly here. This team was very quick, they’re very fast, and although we did have five more field goals, they stepped up to that free throw line, they just got all the breaks in that way. So, I guess we just have to start a new string somewhere along the way and that’s just the way it’s going to be.

Claude Sullivan: Well, Coach Rupp, thank you very much for the visit, not only tonight but all season. We’ve certainly enjoyed being with you, it’s been wonderful. We’ve enjoyed it, and we’ll look forward to another year.

Adolph Rupp: Claude, thank you and thanks to the sponsors who have made this program possible, and I’ll come up and help you broadcast one of the Reds baseball games some day.

Claude Sullivan: Needed, he will be a knee high. Thank you coach and we’ll hold you to that promise.

Here at courtside at College Park Maryland, the Baron Rupp has bowed out for another college basketball season with a record of 27 and 2. Finished second in the NC double A’s, but for the first time in five tries, has lost the championship game.

I always enjoy hearing or reading Coach Rupp talk about Basketball. I’ve recently purchased two of his books on coaching basketball. I purchased some original reel to reel footage of Rupp as well. Eventually, I plan on posting clips of Coach Rupp on here. Note in his comments the need then for the big man and the challenges of finding quality bigs. Gillispie is confronting that same challenge today. Another similarity to the present. Coach Rupp was a huge proponent of the Man to Man Defense. He felt that Zone Defenses should be used sparingly if at all. Gillispie is also similar to Rupp in that he is hot and heavy on discipline and conditioning.